In April 2019, the U.S. government set a new all-time record for the amount of money it collected through taxes in a single month, but at the same time, the budget deficit grew because government spending grew even more than revenue. The Associated Press‘ Martin Crutsinger has the story:

The federal government recorded a $160.3 billion surplus in April as revenues for the month jumped to an all-time high. But even with a flood of tax receipts, the deficit so far this year is running 37.7% higher than a year ago.

The Treasury Department reported Friday that the deficit for the first seven months of the budget year that began Oct. 1 totals $530.9 billion, compared to a deficit of $385.5 billion for the same period a year ago.

April also marked the halfway point for the U.S. government’s 2019 fiscal year, which began on October 1, 2018, and will run through September 30, 2019. The chart below shows the tally of federal spending and tax collections for FY 2019 through April 2019, which is compared with data for fiscal years 2015 through 2018. 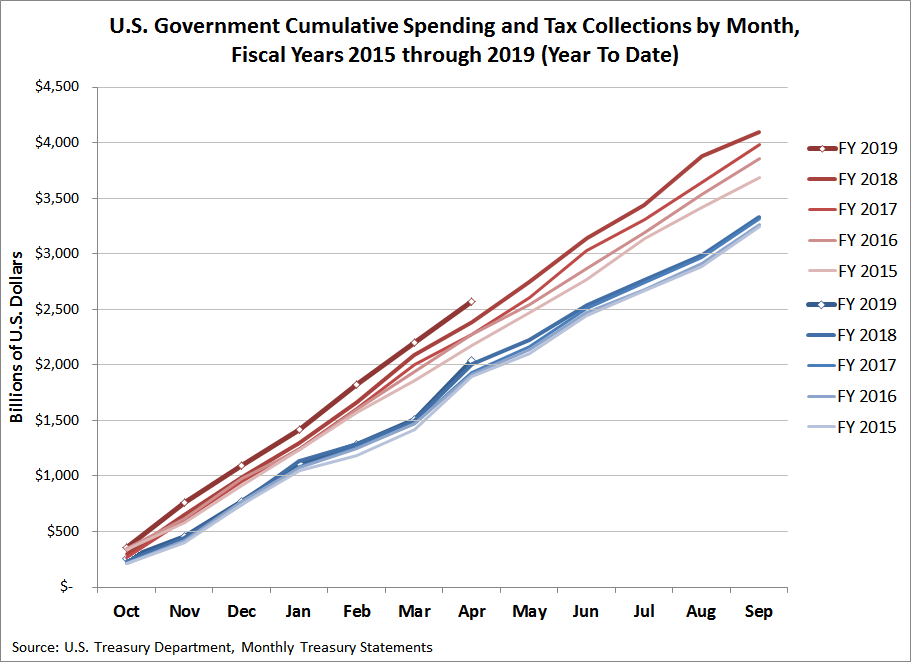 This chart confirms that the amount of money the U.S. government is collecting through taxes has been running at or near record levels. Unfortunately, the chart also confirms that the government’s budget deficits are rising because its spending is growing even faster.

To put the impact of that spending growth into sharp relief, note that had federal spending remained at its FY 2015 levels while federal tax revenue continued to grow to the levels of FY 2019, then the U.S. government’s budget deficits would be smaller today than what they were four years ago. They are bigger today, however, because the growth of federal spending has been booming.

Stated differently, where the primary cause of the U.S. government’s growing deficits and national debt is concerned, it’s the spending, stupid!