The Fifty-Cent Fix for the Air Force’s Broken $1,200 Coffee Cups

The story of how the U.S. Air Force found a fifty-cent fix for its broken $1,200+ coffee cups is one for the “you’ve got to be kidding me” section in the volumes of examples of how the federal government manages to waste such massive amounts of money each year.

That story begins in the summer of 2018 when Victoria Leoni of the Air Force Times broke the story that the Air Force had spent $32,000 to replace 25 coffee cups whose handles had broken.

When a mobility airman drops a cup of coffee aboard an aircraft, the Air Force can be out $1,220.

Since 2016, the replacement cost for some of the service’s coffee mugs, which can reheat coffee and tea on air refueling tankers, has gone up more than $500 per cup, forcing the service to dish out $32,000 this year for just 25 cups, military.com recently reported.

The 60th Aerial Port Squadron at Travis Air Force Base recently revealed that it has spent nearly $56,000 to replace broken hot cups over the past three years. The culprit, they say, is a faulty plastic handle known to break on impact. Each time a handle breaks, the Air Force is forced to order a whole new cup, as replacement parts are no longer made.

The cups, which are designed to prevent coffee from leaking when the aircraft in which they fly are actively maneuvered, have insulated metal bodies and “flip-up” lids. They are designed to plug into an electrical fixture during flight, when an internal heating element maintains the coffee’s temperature on extended flights, which can last for up to 18 hours. But then, there’s that breakable handle on the coffee cups, as can be seen in the following picture from the Air Force. 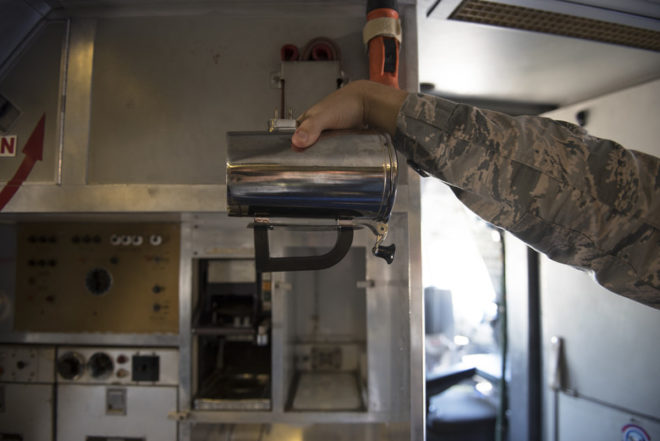 In the picture, the top of the cup pointing to the right-hand side, toward the airman who is holding it. That’s an important clue for identifying what went wrong in its design, which industrial designer Rain Noe picked up on in evaluating the design of the Air Force’s very expensive flight coffee mug.

What’s led to the news reports is that crew members will occasionally drop the mugs, which is understandable. And when they drop them, that right angle on the bottom of the handle hits the ground and the handle breaks. The manufacturer–who is, frustratingly, unnamed–does not offer replacement handles. The mug is no good without the handle so the Air Force is Air Forced to buy an entirely new mug, price $1,220, each time one breaks.

Folks, take a close look at the object and something will become obvious: The handles have been attached upside down.

Not only that, it appears these were attached upside down on purpose.

Noe continues to explain that the plastic handle is very likely an off-the-shelf part that was deliberately flipped upside-down when attached to the mug to provide clearance space for personnel operating the cup’s flip-up lid when drinking from it.

The good news here is that the Air Force has developed a replacement handle that can be 3-D printed, where the cost of materials is just 50 cents. Steven Losey of the Air Force Times reports:

The Phoenix Spark innovation program at Travis Air Force Base in California earlier this year began looking for a cheaper way to deal with broken handles, and figured out a way to 3-D print replacement parts for 50 cents apiece. Travis posted a release online July 2 about the 3-D printing solution and said it “could save thousands.”

That’s a very cheap solution for fixing the Air Force’s broken $1,200+ coffee cups, in that it spares the service from having to buy replacement mugs. The real solution, however, will come when the Air Force develops a more cost effective flight coffee mug to replace today’s $1,200+ version in the first place. Or perhaps trains its personnel to drink chilled coffee for their in-flight caffeine boost instead.