We’re on the cusp of the All-Star Game in baseball season, and believe it or not, the U.S. government has also reached a similar kind of pause in its schedule, having just passed the nine-month mark in its 2018 fiscal year.

Who are we kidding? The two things are nothing at all alike. One is just the latest in an ongoing annual series of mostly meaningless games between two opposing teams that will be played this year in Washington, D.C., and the other will determine which opposing league’s team will have the home field advantage in this year’s World Series.

The game that won’t have any winners is the one to which every American should pay attention, where the score is kept monthly. Here, we find that the release of the U.S. government’s Monthly Treasury Statement for June 2018 was a notable one for the record books for two reasons:

Here’s a chart showing how the U.S. government’s spending and tax collections during its 2018 fiscal year-to-date compares with its previous 2017 fiscal year. 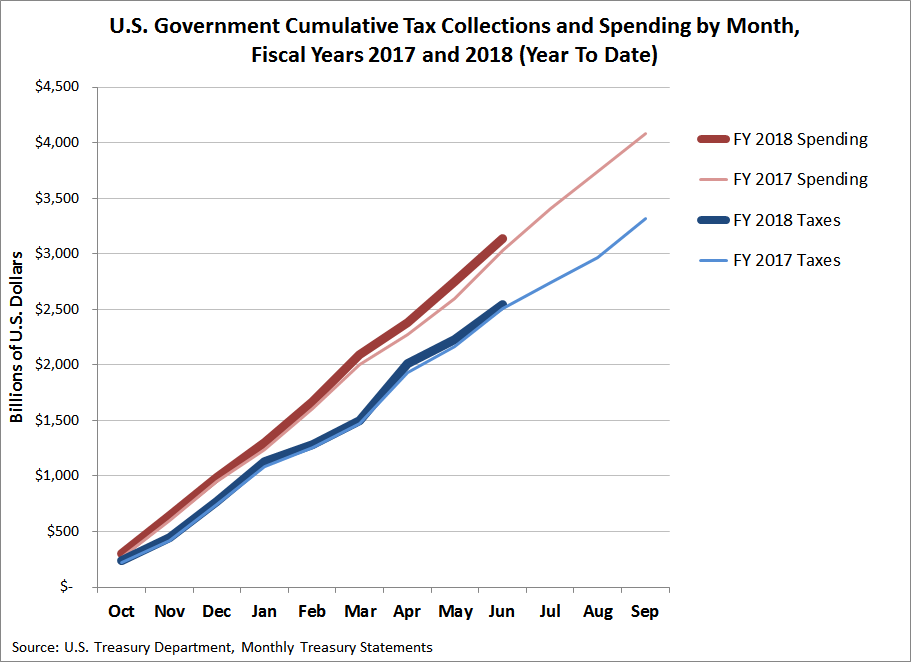 Terrence Jeffrey of CNSNews tallied up the government’s numbers for its 2018 fiscal year through June 2018, and breaks down how it got all that money:

As we have said many times in this space, the problem the country faces isn’t that taxes are too low, but that spending is too high. The CBO projects that even with the Trump tax cuts in place, taxes as a share of GDP will steadily rise over the next decade, and will be higher than the post-World War II average.

But bringing in more tax revenues doesn’t help if spending goes up even faster. And that has, unfortunately, been the case, as the GOP-controlled Congress has gone on a spending spree.

Look at it this way. Tax revenues are up by $31 billion so far this fiscal year compared with last year. But spending is up $115 billion.

In other words, the entire increase in the deficit so far this year has been due to spending hikes, not tax cuts.

In their editorial, the IBD‘s editors asked a good question about whether the Trump tax cuts would be able to pay for themselves, where we have a good part of the data needed to answer it. Keep watching the Beacon for that future article, where the answer to the question may not be what you would expect!