Following the release of the U.S. Treasury’s monthly statement for May 2018, the Wall Street Journal has some grim news about the U.S. government’s fiscal situation:

The deficit, or the difference between the amount of money the federal government spent and what it took in, totaled $532.24 billion in October through May, the Treasury Department said Tuesday. That was 23% more than the deficit of $432.85 billion during the same period a year earlier.

Comparing the U.S. government’s cumulative tax collections and spending in its 2018 fiscal year with the previous fiscal year, however, reveals a different picture. 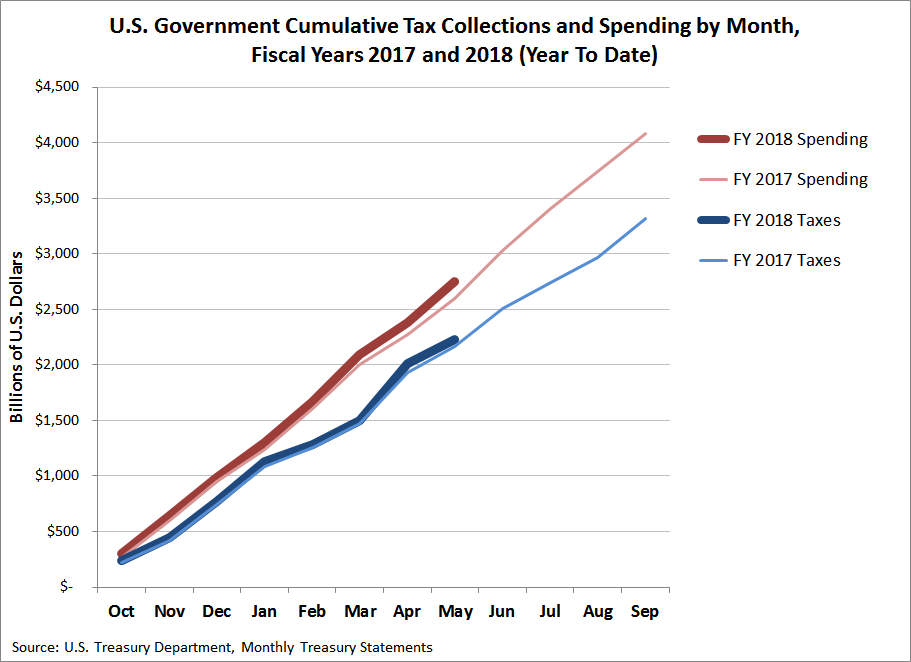 But so has the federal government’s spending, which has cumulatively increased by a much larger amount, especially since February 2018. It is the increased spending that is primarily responsible for driving up the government’s budget deficit and the national debt.

What is happening today is not a new problem. Six years ago, consumer advocate John Stossel wrote a column with the title “It’s the Spending, Stupid!“ that pretty much exactly describes the kind of political thinking in Washington D.C. that leads to the outcomes of bigger budget deficits and an ever-growing national debt. If you updated the dollar amounts, the name of the President and the offices held by two of the then just-elected officials mentioned in the article, it would read as if it were just written yesterday.

Which is why it is worth sharing the article’s conclusion for what it would take to fix the problem of today’s excessive spending growth:

To succeed, the crusade to cut spending needs an ideological understanding of how unsustainable our current course is, not just a narrow appeal to short-term self-interest. People will have to see the wisdom of giving up government benefits now—in exchange for something more abstract: a future free society in which our children won’t be burdened by debt and taxes.