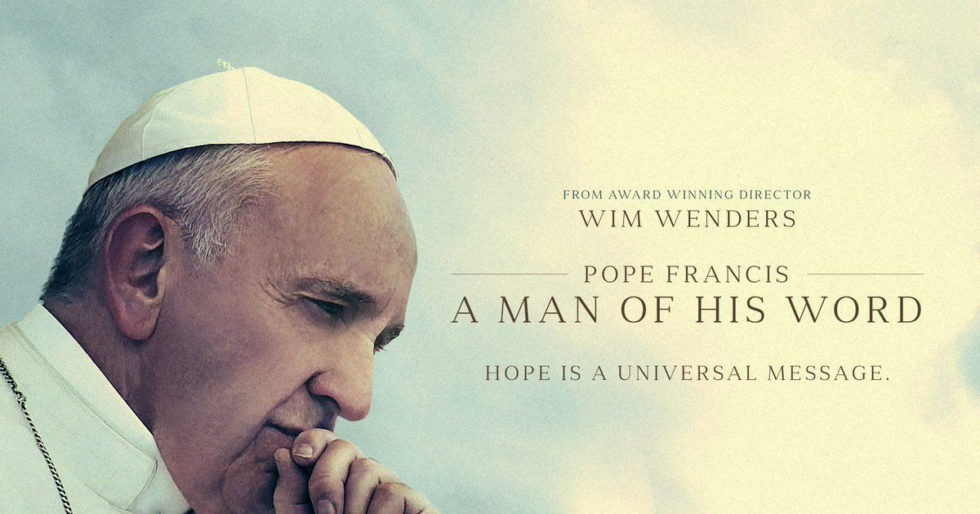 As I sat watching the documentary Pope Francis: A Man of His Word, I kept thinking Pope Francis would have trouble navigating my senior seminars on social entrepreneurship. Even though the social problems—entrenched poverty, environmental degradation, empowering marginalized populations—and the passion to solve them are there, the Pope’s central message of redistributing existing wealth to the poor is too simplistic to be effective or practical. Billions of men, women, and children will remain in poverty as a result.

As a documentary film, Pope Francis: A Man of His Word does quite a bit well even though it’s written and produced to showcase the Pope’s ideas and values. The movie, however, is not so much a puff piece as an authentic attempt to capture the Pope Francis’s worldview. Acclaimed director Wim Wenders uses a personal approach, framing the interviews with the Pope speaking directly into the camera to create a sense of intimacy with the audience. The Pope’s words are paced slowly and in his native language, Spanish, to convey his sincerity and their intended meaning (while giving audiences plenty of time to read the subtitles). The movie’s style and substance creates the feeling of a personal and grounded connection to a man typically insulated by the administrative trappings of a lofty position. This is a Pope who wants to be identified as being part of the flock, not necessarily only as its leader.

Viewers will come away from Pope Francis with a clearer understanding of his commitment to promoting love for all men and women as a central principle of their daily lives. They will clearly see a Pope dedicated to the needs of the poor, the marginalized, and the protecting environment. Many will come away with a deeper sense of empathy for those less fortunate and find inspiration for including them in mainstream society. For many, Christian and non-Christian, the message of tolerance, empathy, and universal love will be a welcome respite from the partisan and divisive politics that now dominate global headlines.

Wenders, and presumably the Vatican, is also using the film as an opportunity to present more progressive views on Catholic teaching while situating this perspective within a biblical context. Loving your neighbor implies accepting women as full and essential partners in the human experience, not judging gay men and women who are sincerely searching for God, building bridges to those with whom you may disagree, and recognizing that God’s love is universal and not limited to Christians or the Catholic Church. Many will also see a long overdue public acceptance and repudiation of pedophilia and the abuses that have shaken the Church’s moral authority. At the same time, viewers will find on film a Pope who is humble. In one notable scene in the Philippines, he admits that he does not have the answers to the questions many of the faithful might have faith in the wake of a devastating typhoon.

But empathy, intentions, and compassion can only achieve so much. On a practical level, Pope Francis’s message becomes problematic. This limitation is most evident when he addresses the problems of global poverty and environmental degradation. At one point, he notes that 80% of the world’s wealth is owned by 20% of the people, and this inequality is unhealthy and immoral. The wealthy, he says, must give up their allegiance to money, be willing to accept living with less, and give it to the poor. Better yet, they should live with and among the poor.

While giving up riches and living simply are laudable and noble goals, they won’t lift the most impoverished into the middle class. They are platitudes, not a program for social change.

Most experts agree the problem with poverty is not concentrated wealth per se. If anything, inequality is a symptom of larger institutional problems, not a root cause. Rather, the root of the poverty problem lies in cultural and political institutions that limit broad-based wealth creation. In short, cultural but mostly political barriers prevent the poor from using their own God-given talents to create value and monetize in a marketplace of willing consumers. For overviews, see the Independent Institute book Making Poor Nations Rich, edited by Benjamin Powell, and Sweatshops in the Global Economy, authored by Benjamin Powell.

This is where my social entrepreneurship students will find a disconnect with the Pope Francis’s prescriptive strategies for lifting people from poverty. The Pope’s redistributionist understanding of wealth’s origin seems simplistic and uninformed. Social entrepreneurs use the same empathy articulated by Pope Francis but don’t find a solution until they’ve understood the root cause. Far closer to hitting the policy mark are the entrepreneurial strategies identified through programs such as the Acton Institute’s Poverty Cure initiative (see the short YouTube film here). The Pope has identified the right problem but misdiagnosed the solution.

A thorough critique of the Pope’s views can also be found in the Independent Institute book, Pope Francis and the Caring Society, edited by economist Robert Whaples. Whaples has pulled together nine economists, legal scholars, philosophers, and political scientists in a sincere effort to dissect the Pope’s worldview on poverty and the nature of private markets as a way to pave a path toward more constructive dialogue with the Vatican. In some cases, such as the relationship between entrepreneurship and economic growth, the Pope’s view simply does not reflect the evidence. In others, his understanding of markets and market-based entrepreneurship is simply too naive to be useful or practical as a guide to policy informed by Christian theology.

In short, countries that promote entrepreneurship, markets, secure property rights, and the rule of law prosper. Those that don’t, remain poor. In fact, as we are seeing unfold in Venezuela, redistributionist societies and economies regress.

Pope Francis: A Man of His Word is unlikely to make a lot of money at the box office. The movie will have staying power in parishes, churches, and community around the world. Wenders has crafted a film that authentically represents Pope Francis’s worldview and, as a consequence, the current thinking in the Vatican. This bodes well for an era of promoting tolerance but casts a shadow over the prospects for alleviating global poverty. Perhaps, however, with the contributions of Pope Francis and the Caring Society, this can be a starting point for a meaningful dialogue on the role of wealth and wealth creation in Catholic and Christian thinking so the world can maximize tolerance and broad-based wealth creation.