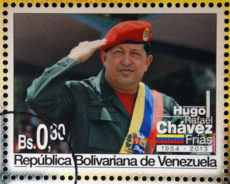 Venezuela’s dictatorship has tried to turn the fourth anniversary of Hugo Chávez’s death into a mystical experience of sorts—and a dose of much-needed political oxygen. Not a simple task in a country with inflation predicted to run at 1,600 percent, an economic growth rate of negative ten percent, a painful shortage of the most basic stuff, the highest crime rate in the world (120 murders for every 100,000 residents), and three-quarters of the people telling pollsters they repudiate the government.

That said, it is certainly an accomplishment for Mr. Nicolás Maduro, Chávez’s chosen heir, to have remained in power this long after his predecessor’s passing.

What has happened? Two things. One, the military, which was reorganized with Cuban help, has remained loyal to the Maduro regime, due to a combination of mafia-style complicity in crime and common fear of the punishment the Chavista hierarchy would face after relinquishing power. Two, the unity of the opposition, that is, of the MUD (the Spanish acronym for the Democratic Unity Roundtable), has been severely hurt by the naiveté of certain leaders who believed that the regime’s periodic invitations to hold a dialogue (always coincident with its worst crises) could lead to a democratic transition.

The last such maneuver took place late last year, when the most effective leaders of the opposition were pushing for a recall referendum to which they were constitutionally entitled. The Maduro government, with the help of three former heads of state (José Luis Rodríguez Zapatero of Spain, Leonel Fernández of the Dominican Republic, and Martín Torrijos of Panama) plus the Vatican, invited the MUD to partake in what turned out to be a predictable charade rather than a meaningful negotiation. Maduro’s sole purpose was to gain time since he knew that, according to the Chavista constitution, the government’s removal in a recall referendum was possible only in 2016. If he managed to survive into 2017, Maduro had nothing to fear. And survive he did, with the help of part of the MUD’s leadership.

Meanwhile, the real leaders of the opposition—some of them in jail, others with restricted movements—have tried to keep the resistance movement alive. Even so, the opposition’s division and, ultimately, its failure to translate the control of the National Assembly it heroically gained in the legislative elections of 2015 into a reversal of Chavismo, have re-instilled cynicism in people. Some polls now show a significant disapproval of the MUD.

Latin American countries have not helped much. Every time the new Secretary General of the Organization of American States, Luis Almagro, has attempted to invoke the Inter-American Democratic Charter to denounce the suffering that Chavismo has inflicted on the country’s people, a significant number of governments that privately express contempt for Caracas have impeded his efforts. The support given by many of them to Maduro’s “dialogue” was a Pontius Pilate–like attempt to skirt their own responsibility in Venezuela’s suffering for having given active or passive support to Chavismo at crucial moments.

The Maduro dictatorship is now busy laying the ground for an electoral fraud in 2018, when presidential elections are supposed to take place (the electoral calendar under Chavismo is a flexible affair: gubernatorial elections should have been held last year but the government postponed them indefinitely). They have ordered every party to renew its registration with the electoral body—a ploy to bar most of them from legal existence.

Four years after Chávez’s death, Venezuela’s descent into the abyss is one of the truly tragic events of the 21st century.