Want a Choice Not an Echo in Education? Then Keep the Feds Out 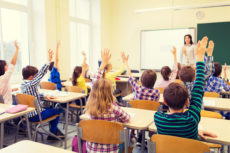 A provision of the recent House GOP tax plan would allow parents to use up to $10,000 of their 529 college savings plans for K-12 expenses including private school tuition. Parental choice in education is a bedrock Republican principle, and President Trump along with Education Secretary Betsy DeVos are leading advocates.

Yet even if the proposed federal K-12 education savings account (ESA) does pass, it may benefit a relative handful of parents, but it likely won’t expand non-public educational choice to parents whose children need it most. Even worse, such help would come at the cost of further expanding the federal government into K-12 education.

Under the proposed change to 529 college savings plans, included in the Tax Cuts and Jobs Act, “higher education expense” is expanded to include up to $10,000 annually for elementary and secondary school tuition expenses, including public, private, and religious schools. Qualified expenses also include costs associated with apprenticeship programs, such as textbooks, supplies, and equipment. (See Section 1202 Consolidation of College Savings Rules, summary pp. 9-10; full bill text, pp. 91-94. See here also.)

This idea isn’t new. In fact, the feds got the idea from the states, which began implementing prepaid college and savings plans more than 30 years ago, starting with Michigan in 1986. A handful of other states had also enacted similar plans by the late 1980s and early 1990s, including Florida in 1987 and Ohio in 1989.

Originally, those state plans were subject to federal income tax because they are investment vehicles. That situation began to change in 1994 when the state of Michigan beat the IRS in the U.S. Court of Appeals for the Sixth Circuit by having its prepaid college plan declared tax-exempt. In response, the IRS threatened to challenge the tax status of all other existing state college savings plans. Congress intervened by passing the Small Business Protection Act of 1996, which created Internal Revenue Code 26 U.S.C. § 529 granting tax-deferred status for qualified state tuition savings programs. By 2000 fully 30 states had enacted tuition savings programs, or Section 529 Plans as they’re now called. (See here also.)

The Economic Growth and Tax Relief Reconciliation Act of 2001 spurred another expansion in education savings by making Section 529 Plans tax-exempt. Today 529 plans exist in every state except Wyoming and have maximum lifetime balances that average nearly $400,000. Anyone can open or contribute to a 529 plan, and there are now nearly 13 million 529 plans averaging more than $21,000 each and worth a combined $275 billion.

Such statistics seem like good news since children with dedicated college savings accounts are far more likely to attend college.

Nevertheless, for all the potential of 529 plans, there’s little reason to believe this federal proposal will expand educational options for parents who need it most, including lower-income parents and those living in states that do not have non-public-school parental choice programs.

Fully two-thirds of Americans are unaware of these plans, even though they originated in the late 1980s. (See also here.) What’s more only families with sufficient disposable income to deposit into savings accounts benefit from 529 college plans. (See here, here, and here.)

Better approaches (again) are coming from the states, where K-12 ESA programs have been proliferating since 2011, when Arizona became the first state to enact such a program. Although existing programs rely on government appropriations, more recent state proposals would be funded privately similar to how tax-credit scholarship programs are funded.

Yet perhaps the biggest risk of all to the proposed federal ESA plan is the further expansion of the federal government into K-12 education. While some parental choice proponents may downplay the likelihood of federal regulation of private schools (see here and here), just wait until the D.C. bureaucrats with a hand in crafting tax policy start having ideas about which K-12 private schools they think parents should choose.

For example, would private schools have to participate in Common Core-influenced state testing? If so, how frequently? Would faith-based schools be required to offer curricula that violates their core beliefs about gender, marriage, birth control, and abortion?

These are not unreasonable concerns given the ongoing controversies involving private postsecondary institutions and the federal government.

As the Cato’s Institute’s Neal McCluskey recently summed up, “We have abandoned federalism to our detriment.” D.C.-driven policies intended to improve K-12 education, including No Child Left Behind and Common Core, have actually made matters worse with seemingly endless testing, invasive data collection, and school curriculum that’s of dubious academic quality, not to mention the homogenizing effect these national policies have on American education.

And such homogenization is perhaps the worst possible outcome. After all, expanding educational options is supposed to be about offering parents alternatives to, not echoes of, the status quo.