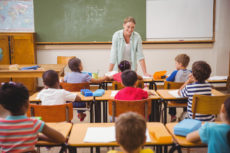 California is an innovation leader in lots of areas except one: K-12 education. Enacting education savings accounts (ESAs) would help.

As I detail in a new policy report, California’s public-school system, which largely rations education based on where a child’s parents can afford to live, is a relic of a bygone era. Such a system cannot provide the customized learning students need to succeed. That’s why a growing number of states are enacting ESA programs.

Similar to health savings accounts (HSAs), which put individuals in charge of their healthcare, ESAs empower parents to direct their children’s education.

The ESA concept is simple. Parents of a student who is not thriving in public school simply withdraw her or him and sign a contract promising not to re-enroll their child while using an ESA. Next the state deposits the per-student formula funding it would have spent into that child’s ESA instead. Under most programs parents receive type of dedicated-use debit card to pay for authorized expenses including private school tuition, online courses, testing fees, tutoring, and special education therapies. Any leftover funds remain in the child’s ESA for future education expenses, including college.

Today ESAs are helping more than 11,000 students in four states with operational programs: Arizona, the first state to enact ESAs back in 2011, followed by Florida, Mississippi, and Tennessee. The empirical evidence to date shows that ESAs are popular, easy to use, fiscally responsible, and constitutional.

No wonder at least 17 ESA bills have been introduced in 13 states this year alone.

Best of all, ESAs empower parents to choose how, not just where, their children are educated, which customizes learning in ways that no one-size-fits-all system could ever match—no matter how lavishly funded.

Parents report that before ESAs their children—many of whom have special needs—were struggling academically and socially. With ESAs parents customize their children’s learning in ways that work for them, from the schools they attend to the tutoring and specialized therapies they receive.

Consequently, students who once seemed hopelessly behind in school are now succeeding by performing at grade level, graduating from high school, and being accepted into college. As one Florida ESA mom put it, “This program is just such a game-changer for parents.”

The country’s most populous state should be an education innovation leader, not a laggard. ESAs are the latest advance in educational innovation that offer all students, regardless of their family’s income or address, the opportunity for personalized learning customized by those who know and love them best: their parents.