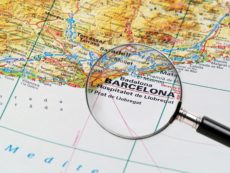 The prime minister of Spain has two requests for the leader of Catalonia.

First: Clarify whether the region is, indeed, declaring independence from Spain. And second: If that is the case, take it back.

It seems like Madrid means business and plans to use whatever means necessary to prevent Catalan independence. I will certainly fault Catalonia’s leaders for declining to issue a clear declaration one way or the other on independence. It seems that they are using the threat of independence as bargaining power and Madrid is calling the bluff. No wonder the many people who recently voted to support secession seem disappointed and confused by the government’s dance.

We’ve had many good comments (comments) on this issue.

For readers interested in hearing both side of the independence argument, here are some links:

Debating Europe has this summary of the arguments for and against independence.

Americans for Catalonia has gives these grounds in support of independence.

The Foundation for Economic Education has this piece on why Catalonia should be allowed to go its own way.

The Bologna Center Journal of International Affairs has this article in favor on an independent Catalonia.
Foreign Policy makes this case against independence for Catalonia.
U.S. News explains why we should support Spain over Catalonia.