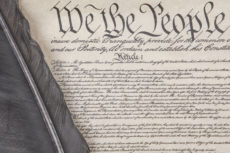 By federal statute, September 17 is designated as a holy day in the American civic religion. On that day in 1787, the delegates to the Philadelphia Convention affixed their signatures to the document that they had created and that governs us today. The website constitutionday.com encourages public demonstrations of love for the Constitution and features a picture of smiling and diverse citizens waving American flags and looking up as if a god is about to descend.

Exactly what we are supposed to celebrate is not clear. A national debt above $20 trillion? A president and Congress with few, if any, limits on their power? A Supreme Court that dares to hold that the antediluvian definition of marriage is unconstitutional?

The priesthood of our civic religion admits we face challenges but claim, in the words of the editors of Investor’s Business Daily, that the Constitution is “as close to perfect as man has come” in the science of government.

So what document could rival our Constitution? Actually, the constitution that preceded it.

The Articles of Confederation, drafted by the same Continental Congress that declared independence, is truer to the Spirit of 1776 than any plan of government that ever existed.

The United States, in their infancy, sought a union strong enough to guide the collective desire for independence from Great Britain but unable to infringe upon the right of self-government in the individual states. Contrary to what our high priesthood tells us, the Articles were an American success story. In 1783 the Treaty of Paris officially ended the American Revolutionary War. King George III acknowledged that the 13 former colonies were “free sovereign and independent states” that could govern their affairs without interference from the distant British Parliament in Westminster.

The people had little to fear from a union styled as “firm league of friendship.” Congress had no power to act upon individuals. Instead, it had to work through the state governments. In this manner, the states served as mediators between Congress and the people. This buffer provided greater security to the people in their rights secured by the state constitutions.

The Articles also restricted congressional power with term limits. Under Article V, “no person shall be capable of being a delegate for more than three years in any term of six years.” The Articles endeavored to prevent the establishment of an American ruling aristocracy and championed the idea that public service should be open to individuals as talented as those already holding power (or perhaps more so).

Before the Confederation Congress could borrow money, a supermajority of delegates had to approve. Although the confederal government struggled with fiscal issues because of the cost of the War of Independence, the supermajority requirement was meant to protect the fiscal soundness of the government and to prevent the rulers from incurring unnecessary debt. Congress was to live within its means absent extraordinary circumstances.

Under the Articles, there was no omnipotent judiciary that claimed the final say on the meaning of the charter of government. The Confederation opted for a more modest judicial system in which Congress could only create courts to adjudicate maritime matters. State courts were the institutions that decided disputes among the citizenry.

While the states enjoyed vast powers, we should not think that they operated with no limits. The Articles imposed reasonable restrictions on the state governments. For example, absent the consent of Congress no state could send or receive ambassadors, enter into treaties, or engage in war. The Articles sought to make the states one as to foreign policy but leave them otherwise free to govern their internal affairs.

Of course, the Articles were not perfect. Congress needed an independent power to raise revenue, and the struggles to service the debt after the peace was concluded ultimately led to the Philadelphia Convention and our more energetic system of national government. Modest revisions in the Articles could have permitted the United States to function as a viable confederacy for the remainder of their existence.

Rather than bow down and venerate the Constitution on September 17, Americans should dust off the Articles of Confederation and study the handiwork of the Continental Congress. In it they will find a plan of government that makes liberty the primary object of government and power serving as a mere satellite.

William J. Watkins, Jr. is a research fellow at the Independent Institute and the author of the book Crossroads for Liberty: Recovering the Anti-Federalist Values of America’s First Constitution.