Sex and Economics: Is Capitalism Less “Bang” for Your Buck? 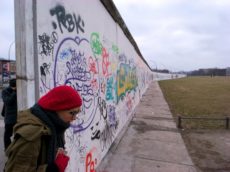 Several months ago, I wrote a piece titled, “My Vagina Doesn’t Care for Your Identity Politics,” in which I discussed how the most recent presidential election played directly into the idea of identify politics—that an individual should engage in or refrain from certain activities based on a particular group to which they belong.

Alas, here I am again with another discussion of sex and economics. Vaginas (and orgasms) are once again an apparent topic for discussion.

A recent article in the New York Times discussed a study that suggested women behind the iron curtain in communist East Germany reported more sexual satisfaction (in the form of more orgasms) than their Western, capitalist counterparts. The author uses this data to suggest that communism was (is?) better for women in many ways and that this “benefit” of communism is sadly overlooked.

Some might remember that Eastern bloc women enjoyed many rights and privileges unknown in liberal democracies at the time, including major state investments in their education and training, their full incorporation into the labor force, generous maternity leave allowances and guaranteed free child care. But there’s one advantage that has received little attention: Women under Communism enjoyed more sexual pleasure.

The article contains an interview in which one woman seems to long for the communist system her mother “enjoyed.” Stating that her mother was pressuring her to start a family, she said, “it was so easy for women before the [Berlin] Wall fell. They had kindergartens and crèches, and they could take maternity leave and have their jobs held for them. I work contract to contract and don’t have time to get pregnant.”

How many times can I hit my head against a wall?

Marian Tupy, a policy analyst with the CATO Institute and editor of www.humanprogress.org penned an excellent response to the article. As someone who grew up under a communist regime, Tupy points out that women in communist countries were far from liberated. Men ran communist regimes. Prominent women in politics held that position as “appendages of their powerful husbands” and would never have been accepted in the political arena as independent actors.

He also points out, quite rightly, that the integration of women into the labor force under communism wasn’t a liberation—but more, forced work. Women who were assigned to factory jobs were still expected to engage in typical domestic work like cooking, cleaning, and rearing children. Tupy also describes how women in many communist countries, a fact noted by the author of the Times article, were far from sexually liberated. Pornography and prostitution were banned. Condoms, oral contraceptives, and other forms of birth control were hard to come by.

Romanian dictator Nicolae Ceausescu, for example, implemented a variety of reproductive policies designed to cultivate a generation of pure communists. The regime fined anyone over the age of 25 who wasn’t married. If you were married but hadn’t had a child after two years, you were also subjected to a fine. Access to intrauterine devices (IUDs) and oral contraceptives disappeared. Left with no means to prevent pregnancy, this led to a startling number of illegal abortions when women sought to end unwanted pregnancies.

How liberating! Isn’t this what every woman wants? Who doesn’t love the idea of government dictating your labor force participation while simultaneously prohibiting you from family planning!? I don’t know about you, but being punished for failure to procreate seems totally reasonable. Who doesn’t love Big Brother dictating your sex life? (End sarcasm.)

I think there is something else to consider here as well. Let’s say that the author and the study she references are correct. (For the record, I think there’s a real chance they are wrong. Surveys, unless done very well are subject to serious error. This is even more true when it comes to sensitive issues–like sex. Men, for example, tend to overreport their number of previous sexual partners while women tend to understate.) But, for sake of argument, let’s say that everything the article said about sexual satisfaction in East and West Germany is true and and that women under communism did have more orgasms than their western counterparts and had more sex. To play the part of buzzkill economist I ask the following question.

What was their opportunity cost? In other words, what were people giving up under communism and under capitalism to have sex? If they weren’t having sex, what would people be doing instead?

Could it be that the abundance of entertainment, disposable income, and other freedoms allowed by capitalism meant that women and men were able to enjoy other activities outside of the bedroom?

If you’re consistently having to worry about things like forced childbirth, being thrown into prison for your political or religious beliefs, being the victim of an ethnic purge, or starving to death as the result of a man-made food shortage—I imagine you (a) may not want to go out a lot and (b) may want to spend some additional amorous time with your partner. After all, it literally may be your last night on earth before you’re thrown into the gulag. Perhaps, instead of taking their cues from a Jimmy Buffett song for sake of alleviating the crippling poverty and repression that comes under communist regimes, western women had other ways of finding pleasure and happiness.

When it comes to discussing the status of women, it’s important to look at the whole picture. When it comes to the rights of women under communism versus capitalist societies, there’s really no contest. Need a current example? Just ask the women of North Korea.

It appears that Jimmy Buffett isn’t the only relevant musician here. Apparently, the Smiths have also recognized the opportunity cost of sex. Many thanks to one of my colleagues for altering me to this example!