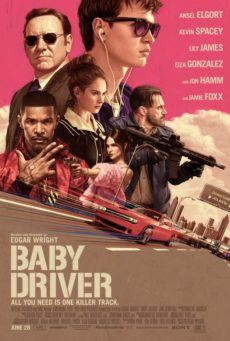 Audiences will know they are in for a wild ride the second the black wheels and red fender of Baby’s car enters the movie. And they are in for a treat. One of the most anticipated movies of the year, Baby Driver delivers fast, slick action wrapped up in a heart wrenching story of identity and personal loss.

Baby (Ansel Elgort, Carrie, The Divergent Series, The Fault of Our Stars) is the quiet, mild mannered driver pressed into helming the getaway car for a series of bank robberies. The heists are orchestrated by Doc (Kevin Spacey, American Beauty, L.A. Confidential, Superman Returns), a crime boss who never uses the same crew twice. This, we find, ensures the sociopaths that make up the crew never bond and undermine the operation. They are paid well and move on. The varied crew members—most notably Bats (Jamie Foxx, Django Unchained, Collateral, Ray), Buddy (Jon Hamm, Mad Men, Sucker Punch, The Town), Buddy’s girlfriend Darling (Mexican actress Eiza Gonzalez), Griff (Jon Bernthal, The Walking Dead, The Wolf of Wall Street, Fury) and Eddie “No-Nose” (musician Flea, Back to the Future films)—don’t appreciate the youthful, less than enthusiastic Baby in their midst. These differences in look and personality become a source of tension between Doc and the members of his gang.

Baby grew up boosting cars after his parents were killed in a car crash, and he was assigned to a foster home. The crash left him suffering from persistent ringing in his ears (tinnitus) which he drowns out by playing hard driving music through earbuds. The loud volume becomes a way for Baby to escape the chaos and violence surrounding him and keeps his focus on driving. Doc drafts the young driver into his gang after Baby boosts his Mercedes, which also happened to be loaded with loot from one of Doc’s capers. To pay off his “debt,” Doc “hires” him as the getaway driver his bank heists.

Life gets complicated for Baby when he falls for Debora (Lily James, Fast Girls, Pride and Prejudice and Zombies, The Exception) a waitress at a local diner. Despite the cash he earns, the bank robbing lifestyle doesn’t sit well with Baby. The crush on Lily is the boost he needs to end his getaway driver ways. But Doc has other plans even after Baby has technically fulfilled his end of the bargain. One last job, Doc says. But, of course, crime bosses never set their people free.

The stakes ramp up when Baby is enlisted to case the next robbery, not just drive, pulling him in even deeper into the violent world of the gang. When the job begins to fall apart, Baby is faced with trying to escape the police, keeping himself alive as the gang hunts him down, and saving the lives of Debora and Joe, his kind-hearted deaf foster father (played by the deaf actor CJ Jones). The remainder of the movie is a gripping and wild ride to a heartbreaking (but not tragic) end.

Fans of the 1968 movie classic Bullitt, the iconic Steve McQueen movie that ushered in the modern car chase, will likely be impressed with the legacy left by writer-director Edgar Wright (Shaun of the Dead, The World’s End, Anti-Man). Baby is not just a highly skilled driver, and the chase scenes aren’t in the movie to pump adrenaline for the audience (although they do). Rather, the chases are the heart of the movie.

Baby Driver without the chase scenes is a fundamentally different movie, and Baby’s character is incapable of being understood without them. We see Baby’s intelligence, cunning, and skill through his driving, as well as his cool headedness and problem solving skills. His intelligence is off the charts despite a geeky social awkwardness that turns most people off while charming those like Debora with whom he bonds. Although Kevin Spacey plays Doc’s character with a cold practicality, we quickly learn his crime boss demeanor has a few soft cracks for Baby. These emotional layers serves the film and climactic action scenes at the end.

For all the excitement and energy, however, Baby Driver’s success as a film depends primarily on Wright’s tight screenplay, high quality acting, a story with a few important twists, and the solid execution of filmmaking basics. The story of a reluctant gang member attempting to free himself from the trappings of a criminal life is not particularly new or innovative. The protection of loved ones as a justification for the use of violence is conventional as well.

Nevertheless, Baby Driver raises important questions for those willing to look beyond the car chases and conventional characterization. Faced with severe personal loss, untreated through social conventions or programs, Baby builds his personal identity around relatively mild criminal activity—stealing cars and driving fast and well. Some might call that teenage “acting out,” albeit via breaking laws. Despite his innate empathy for others, he is drawn into an increasingly violent criminal lifestyle. Once he is in, he has neither the skills nor the power to escape without help, even when he has the motivation.

Baby’s trajectory into violent crime is not that different from the pathway of young boys (and girls) entering gang life in today’s inner cities. Their world, like Baby’s, is a toxic mix of kids with normal desires and aspirations and sociopaths who will use whatever means are necessary to establish and sustain their dominance.

For those willing to look, Baby Driver provokes a slew of complicated issues around personal culpability for harm, redemption, and salvation that question the wisdom of the “incarcerate and punish” approach that dominates the U.S. criminal justice system. Should the real world kids like Baby face the same legal consequences as the sociopaths who orchestrate and implement the schemes that harm others? Does incarceration really reform criminals?

Baby Driver, in fact, answers some of these questions about motivation, identity, and heart in its narrative toward the end of the movie but leaves much to another day. For those uninterested in these soulful questions, Baby Driver is a wildly fun ride anyway.