What Would the Iron Lady Do with the U.S. Department of Education? 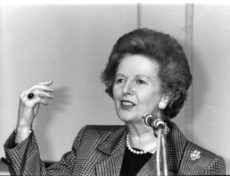 In her remarks DeVos insisted that “education is best-addressed at the state, local and family levels” and recalled some words of wisdom from Lady Margaret Thatcher, who served as the United Kingdom’s first woman Education Secretary from 1970 to 1974. As DeVos explained:

Lady Thatcher regretted that too many seem to blame all their problems on “society.” But, “who is society,” she asked. “There is no such thing! There are individual men and women and there are families” – families, she said – “and no government can do anything except through people and people look to themselves first.” The Iron Lady was right then, and she’s still right today!

So, what exactly is the U.S. Department of Education supposed to do? Get out of the way, according to DeVos, because “those closest to the students know best.” What’s more:

The time of inefficient, top-down, one-size-fits-all mandates is over. This approach does not work; it has not worked; and it will never work! And we’re fooling ourselves to think otherwise. My job is to get the federal government out of the way, so that you can do your jobs.

Sounds a lot like Thatcher, who advocated “reclaiming territory for freedom” so that “the state’s power is reduced and the power of the people [is] enhanced.”

Like DeVos, Thatcher supported parental choice in education, and believed that ensuring students receive a quality education shouldn’t require dictating a curriculum to teachers. DeVos, however, is in a much better position than Thatcher was when it comes to restoring local control over education.

There is strong and growing momentum for parental choice at the state and local levels, as DeVos explained:

School choice reforms continue to gain momentum across the nation precisely because they have been driven from within states. Minnesota passed the nation’s first charter law in 1991, and the first voucher program was launched in Milwaukee, Wisconsin that same year. They paved the way for states like Florida and Indiana and Louisiana to create robust and successful choice programs. ...

These are just a few examples of school choice’s increasing momentum. In the first six months of this year, 40 legislative chambers in 23 states have passed bills expanding school choice for students and their families.

Another advantage DeVos has over Thatcher when she served as Education Secretary is that DeVos has a boss who believes parents should be in charge of their children’s education.

“President Trump is determined to place power back in the hands of people,” DeVos stated. In fact, the President signed an executive order on April 26 giving the department 300 days to review regulations that undermine state and local control of education and recommend which ones to repeal or replace. DeVos’ office has also published a request for public input to help with this review.

We’ll have to wait until February of next year for the final recommendations, but there’s already sufficient justification for President Trump to scale ED back—way back.

DeVos rightly noted that ED spending has nearly tripled in real terms since 1980, while student achievement among 17-year-olds about to graduate high school has remained largely flat. In his proposed budget Trump cuts ED’s funding by $9.2 billion. Close to two-thirds of those cuts come from eliminating programs that are duplicative or just don’t work.

But ED’s flaws run much deeper than its dozens of ineffective programs (Chapter 10), and DeVos knows it.

In a speech to the Arizona State University Global Silicon Valley Summit in Salt Lake City, Utah, in May DeVos threw down the gauntlet, stating that “it’s time for us to break out of the confines of the federal government’s arcane approach to education.” This approach, modelled after 19th century Prussia (see here and here), relies on heavy-handed centralization that assigns students to schools based on their zip codes without regard for their individual talents or needs.

DeVos’ student-centered thinking doesn’t sit well with the folks over at the American Federation of Teachers, which sent her a heated tweet insisting that education funding is for the public school system, not individual students.

Of course, the AFT’s position is symptomatic of what Ronald Reagan once dubbed “the cult of the state.” It ignores the cold, harsh reality that the federal government is simply incapable of managing the education of nearly 54 million children—a reality that certainly wouldn’t have escaped Thatcher, an admirer of the late Nobel Prize winner and Fatal Conceit author F.A. Hayek.

Yet for those who still believe D.C. has some preternatural expertise when it comes to educating other people’s children, consider just some of the promises made and broken over the years since ED’s creation back in 1979.

Today at the state level we’re trying to extricate ourselves from Common Core, the $80 billion boondoggle launched during the Obama administration. And we’re still coping with the aftermath of the Bush administration’s No Child Left Behind Act, including hours’ worth of complaints about the ongoing lack of local flexibility in its replacement, the Every Student Succeeds Act (ESSA), during a recent House Education and the Workforce Committee.

Another emerging advantage DeVos has that Thatcher didn’t when it comes to restoring local control over education is that one of ED’s most vocal proponents is now turning against it: the country’s largest teachers’ union, the National Education Association.

It’s no secret that President Jimmy Carter pushed for ED’s creation in exchange for the NEA’s endorsement. Now, however, that same union refuses to work with the department because it can’t get the Trump administration to do its bidding.

The final (potential) advantage DeVos has for getting ED out of the way is that Republicans hold majorities in both houses of Congress. GOP party platforms dating back to 1980 have supported parental choice and local control in education. Only twice, however, did the GOP actually call for the abolition of ED: in 1980 and again in 1996 (although the 2008 platform did call for a review of ED programs and administration).

If history has taught us anything about ED it’s that this bureaucracy is resilient. It was originally created back in 1867. The following year Congress downgraded and defunded it—but stopped short of eliminating it. Over the next century ED was shuffled from one agency to the next until it was once again elevated to a Cabinet-level department in 1979.

In spite of Reagan’s campaign promises to abolish ED, he appointed an education secretary who was a leading proponent of its creation, Terrel Bell. The release in 1983 of A Nation at Risk by Reagan’s National Commission on Excellence in Education helped entrench ED to combat what the report called “the rising tide of mediocrity” in education.

More than three decades later ED has not reversed this tide, and calls are intensifying to restore local control over education.

Fully four out of five Americans don’t want federal involvement in their children’s schools, including funding, directing teaching methods, testing, or accountability. And, 55 percent of the public are dissatisfied with American education in general—the highest dissatisfaction rating since 2000.

In February Congressman Thomas Massie of Kentucky introduced a one sentence piece of legislation (H.R. 899) to abolish ED. It states, “The Department of Education shall terminate on December 31, 2018.” The bill has 10 co-sponsors.

Terminating ED can be readily accomplished without eliminating a single education program. Simply return associated program funding and administration to the states. Eliminate all of ED’s administrative and overhead functions and return the associated funding to taxpayers in the form of a federal tax refund.

A select few programs and activities do serve legitimate, constitutional purposes, but none require maintaining ED.

The Office of Civil Rights should be moved to the Department of Justice. The various educational programs for our veterans are earned benefits, not entitlements, and these should be overseen by the Department of Veterans’ Affairs. Finally, the D.C. Opportunity Scholarship Program is already managed by an approved non-profit organization. Instead of reporting to ED, it could submit annual reports to Congress directly.

If returning power to the people is the goal of the Trump administration and Education Secretary DeVos as it was for Lady Thatcher, then eliminating ED would represent significant stride toward restoring local control over education.