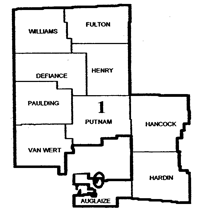 Last Monday, the Supreme Court announced that it would hear a Wisconsin case that would overturn a highly gerrymandered State Assembly redistricting map that heavily favors Republicans. The Court plans to hear arguments next fall, and it is expected that it will be closely divided. (New York Times, “Justices Take up Gerrymandering Based on Party,” June 20, 2017)

Gerrymandering gives those in control of the redistricting process the power to enhance their representation by means of what is known as “packing and cracking”: The ruling party “packs” opponents into a few carefully shaped districts where they will be an overwhelming majority. Then the remaining opponents are “cracked” or divided among numerous districts where they may be a large, but ineffectual minority. Thus, in Wisconsin in 2012, Republicans received only 49 percent of the statewide votes for Assembly members, yet ended up with 60 out of 99 seats. In 2014, they won 63 seats with only 52 percent of the vote. When Democrats happen to control the redistricting process, they do the same thing in reverse.

My own favorite gerrymandered district is what I call the “Ohiomander”—Ohio’s 2002-2012 Senate District No. 1, a monster so bloodthirsty that is actually craning its neck around in order to bite itself on the rear end! In a democracy, voters are supposed to choose their politicians. As has often been noted, gerrymandering instead allows politicians to choose their voters.

Gerrymandering can easily be kept in check by means of a constitutional requirement that state legislature and Congressional districts be as compact as possible in terms of number of county fragments created and total district perimeter. Here’s how crowdsourcing could be employed to achieve this result entirely through voter input:

All registered voters would be free to submit plans on an equal footing for a period of say one month. Each plan that meets the primary requirement of approximately equal population would be evaluated in terms of the number of county fragments created, and in terms of the total perimeter of the districts. At the end of each day, the best plan, evaluated first in terms of minimizing county fragmentation, and then with the smallest total perimeter as a tiebreaker, would be identified as the front-runner and posted online.

State officials would be required to provide computer software that would allow voters to construct these plans by clicking on counties and/or census tracts, and to submit them in a standardized electronic format.(1) In order to keep the data load manageable, each voter could be limited to one submission per day. Only the voter registration credentials of the front-running plans would actually have to be checked, so that this would not be a burden.

Of course every office holder and potential rival will submit a plan that maximizes his or her chances of election and otherwise is as compact as possible. Likewise, every special interest and ethnic group will submit a plan that guarantees it one or more representatives. But the winning plan is more likely to be one that has no political objective at all, and even if a political plan did win, it would most likely have been drawn around a seat that would have been safe in any event.(2)

By crowdsourcing the candidate plans rather than simply generating a compact plan with a soulless computer, the final plan would be the product of intense public participation. Of course, voters would be free to submit plans that had in fact been generated by their own soulless computers, but no one could complain that their pet plan was not given equal consideration.

Under a strict compactness rule with crowdsourcing, there is no real need for a Redistricting Commission. But if it makes the politicians feel more important and secure, a harmless bipartisan Commission could be established with the largely ceremonial responsibility to “start the bidding” with an initial round of proposals, as well as the power to make a final round of submissions after the public submissions are closed.(3)

Compact districts will increase voter awareness of what district they are in and who their incumbent representatives are. By requiring candidates to travel fewer miles to campaign, they will make campaigning less expensive in terms of both time and money. At the same time, they will reduce the carbon footprint of politics, and thereby help save the earth from anthropogenic global warming...

The plaintiffs in the Wisconsin case would base the constitutionality of a redistricting plan on what they call the plan’s “efficiency gap,” a criterion proposed by Stephanopoulos and McGhee (2015). Votes are said to be “wasted” if they are cast for a losing candidate, or if they are cast for a winning candidate in excess of the minimum needed to win. The efficiency gap is then the absolute difference between party A’s wasted votes and party B’s wasted votes, divided by total votes cast. In Wisconsin the gap was 13.3 percent in 2012 and 9.6 percent in 2014, both to the disadvantage of Democrats. The plaintiffs argue that any gap in excess of 7 percent should be considered unconstitutional. The Times report does not indicate whether it is the Wisconsin or U.S. Constitution that is said to contain the 7 percent standard.

The efficiency gap is indeed a useful approximate measure of the divergence between the statewide popular vote and each party’s share of the representatives. A large gap probably does indicate partisan gerrymandering. However, the 7 percent standard is entirely arbitrary, and simply minimizing the efficiency gap would itself require aggressively gerrymandered districts. Furthermore, although American politics has become quite bipartisan, representatives constitutionally represent their geographical district, not their party. Any redistricting rule should be party-blind, and not designed to entrench the existing two parties.

Some reformers object that a strict compactness rule would in practice favor Republicans, given that Democratic voters often self-pack themselves into large cities. (See Atman 1998 and Chen and Rodden 2013.) This effect is usually illustrated in terms of either a cap on individual district perimeter ratios, computed as the ratio of a district’s perimeter to the square root of its area, or else an equal-weighted average of these or similar ratios over all districts. However, it can be shown that total district perimeter is equal to an unequally weighted average of the district perimeter ratios, in which the weights increase with the area of the district. In addition to being very simple to to compute and easy to visualize, minimal total perimeter therefore actually requires sparsely-populated rural and suburban districts, which tend to be Republican, to be more compact on average than densely populated urban districts. This may not be enough to completely offset any Republican bias, but it at least greatly diminishes it.(4)

Other reformers, in addition to “requiring” that the number of divided governmental units be “minimized” and that the districts created be “compact,” would “require” that the number of “politically balanced” districts be “maximized,” and that the remaining safe seats be “balanced” in proportion to past statewide election returns. For this purpose, a district is defined to be “politically balanced” if neither party had more than a 5 percent lead in a past statewide election. (These were the actual provisions of the unsuccessful 2012 Ohio Issue 2.)

However, the only way the latter two goals can be attained is by artificially shaping the districts. These criteria therefore inconsistently mandate gerrymandering, at the same time that the other criteria attempt to restrict it!

Furthermore, creating as many closely contested seats as possible would only engender political instability, by increasing the odds that a political fad can change the face of the legislature in a single election. Some inertia in politics is in fact desirable. And by apportioning the remaining safe seats according to previous voting outcomes, these criteria would artificially perpetuate partisan bailiwicks. Past election returns should not be used to rig future outcomes.

And of course, many reformers believe that redistricting should be left to a bipartisan or non-partisan commission. However, a truly bipartisan commission will not be able to agree to anything other than that all incumbents should be re-elected, regardless of party. And a non-partisan commission will still have to make arbitrary value judgments after weighing endless public testimony by special interest groups. Crowdsourced redistricting with a simple compactness rule will allow every politician and special interest group to have a say, and yet will impartially come up with a map that requires politicians to serve all interests.

(1) Since census tracts have known population, generally follow geographical and political contours, and are limited in number, it is expedient to use them as the basic unit of choice after counties. As is customary, districts should be contiguous and bounded by a single non-intersecting line. In addition, each census tract included in a district should be directly accessible by road, bridge, tunnel or regular ferry service to the rest of the district, so that candidates can reach the entire district by car without having to leave it. District lines that span uninhabited water or land should be included in the district’s perimeter.

(2) It is possible for a plan to split relatively few counties and still be highly gerrymandered. In order to prevent a last-minute submission with a slightly smaller fragment count but large perimeter from winning, during say the last week of submissions, plans should be evaluated entirely in terms of perimeter, so long as they create no more fragments than the final front runner from the first stage of submissions.