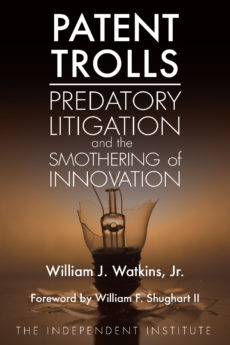 In a unanimous decision (TC Heartland LLC v. Kraft Foods Group Brands LLC), the U.S. Supreme Court gave a kick in the rear to patent trolls. The Verge has this article on the case.

Patent trolls obtain patents not for the purpose of producing an invention or a technology but to license and enforce the patents. In other words, trolls have no plans to actually make the patented product or process; instead, they prefer to lie in wait, letting someone else do the heavy lifting and then suing just as the new creation is about to take off commercially. It is a shakedown process that threatens innovation.

In a nutshell the Court held that venue in patent suits exists where the defendant company is incorporated. Until this decision, a patent troll had great liberty to choose the forum in which to sue an alleged patent infringer and often chose plaintiff friendly locations such as the Eastern District of Texas. Typically, the defendant corporation had no ties with this district, which has been described as a “judicial hellhole.” But a prior appellate court decision held that suit was proper wherever the defendant sold products. So, for example, if Apple sells smart phones in east Texas, it was subject to venue there. No more. (For a discussion of venue in patent troll cases, see my book Patent Trolls, specifically pp. 50-51.)

The Electronic Frontier Foundation has this summary about the import of the ruling:

While today’s decision is a big blow for patent trolls, it is not a panacea. Patent trolls with weak cases can, of course, still file elsewhere. The ruling will likely lead to a big growth in patent litigation in the District of Delaware where many companies are incorporated. And it does not address the root cause of patent trolling: the thousands of overbroad and vague software patents that the Patent Office issues every year. We will still need to fight for broader patent reform and defend good decisions like the Supreme Court’s 2014 ruling in Alice v. CLS Bank.

Agreed. The war against patent trolls is far from over, but TC Heartland certainly improves the situation.