Review: Guardians of the Galaxy Vol 2 Romps Through Space with Purpose 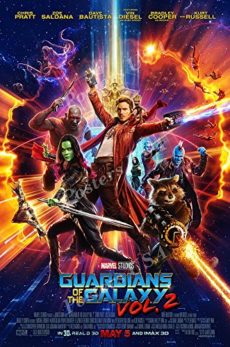 Chalking up Guardians of the Galaxy Vol. 2 as a just a fun romp through the universe with the galaxy’s most dysfunctional family would be easy. But the film, like the Marvel comics that inspired it, is much more. Writer-director James Gunn (Slither, Dawn of the Dead, Guardians of the Galaxy) has done an artful job fusing humor, action, first-class special effects, and social commentary to create a story that provokes deeper questions about the nature of man and the rise of tyranny.

The action, and the humor, starts with the opening credits as audiences are re-introduced to the bickering siblings of circumstance: Peter Quill (Chris Pratt, Guardians of the Galaxy, Jurassic World, Passengers), Gamora (Zoe Saldana, Star Trek, Avatar, Colombiana), the irreverent Drax (Dave Bautista, Riddick, Spectre), the raccoon weapons master Rocket (voice of Bradley Cooper, American Sniper, Silver Linings Playbook), and woodland creature Baby Groot (voice of Vin Diesel, The Fast and the Furious, Chronicles of Riddick, xXx). They begin Volume 2’s journey by defending the Sovereign race, headed by Ayesha (Elizabeth Debicki, The Great Gatsby, Everest), against an interplanetary monster. Presumably the Guardians have taken on this task to recover Gamora’s sister Nebula (Karen Gillan, Doctor Who, Guardians of the Galaxy, The Big Short), who was imprisoned by the Sovereign race’s leader.

As the Guardians leave, Rocket steals some of the Sovereign race’s batteries, a coveted energy source, triggering a pursuit by a fleet of drones. As Quill evades their pursuers, the Guardians try to “jump” to safety on another planet while navigating a meteor storm. The drones are thwarted by a Celestial, a powerful god-like consciousness that takes the form of humans. Their savior, it turns out, is none other than Peter’s long-lost father Ego (Kurt Russell, Overboard, Stargate, The Hateful Eight). Ego has been searching for Peter since his mother died of cancer and was “stolen” by the pirate Yandu (Michael Rooker, Walking Dead, Slither, Guardians of the Galaxy) to be raised an orphan among criminals. Peter becomes torn between his desire to bond with his father and the Guardians when Ego invites him to live on a planet he created so he can be a real father.

Gunn could have easily settled for a storyline that focused on the tensions between a son and father learning about each other. Instead, he uses the story to build conflict between the quest for personal identity through loyalty to self versus commitment to community, making Guardians of the Galaxy a film for our times. Gunn’s script peels back the layers of Ego’s character to expose the dark side of the unconstrained pursuit of self.

Once Ego had achieved the height of personal consciousness, he created a planet with his himself as its core. He elevated himself above all other beings and elements of the universe. The physical creation of the planet wasn’t enough. Ego began a journey for something more, a quest for purpose and meaning. He traveled the universe, procreating with various races, including Peter’s mother, to create a perfect Celestial match to himself. The combined power of Ego and his progeny would allow them to take their power to an entirely new level. They would be able conquer and control the universe. Ego, convinced of his own Celestial superiority, is a God in service to himself. A more direct and unfiltered statement of the limits of the unconstrained Randian identity “A is A” would be hard to find. In fact, Guardians 2 could easily be interpreted as a frontal assault on Rand’s vision of self and its description in works such as The Virtue of Selfishness.

Gunn places the imperfect, bickering, dysfunctional Guardians in direct contrast to Ego. The Guardians, unlike Ego, have empathy for each other. They discover their strength and sense of a larger purpose rises higher than their own individual egos. They learn to tolerate if not embrace their imperfections to achieve a common purpose. Most directly, this purpose is saving the galaxy. Peter is ultimately forced to choose between the unwavering pursuit of self and the raucous, bumbling, flawed nobility that drives the Guardians.

This theme and the choice between self and community also plays out with other characters, most notably the deadly sibling rivalry between Gamora and Nebula. Their father, Thanos, put his own sadistic wants above his children, forcing them to fight each other. Their brutal fights ate away at their self-esteem and core, turning them both into killing machines. Gamora turned onto a path of redemption. Nebula chose a darker path of crime, murder, and revenge.

Despite the heavy theme, Guardians of the Galaxy, Volume 2 remains a engaging film, a rare combination of state of the art filmmaking and substance. Gunn is able to combine a keystone cops comedic lightness with first-rate special effects, making the film suitable for a wide range of audiences. Gunn leverages the comic talents of his cast and quirky characters to craft an entertaining, action packed, and amusing addition to the Marvel Comics film universe. The movie has already grossed more than $430 million dollars worldwide, double its production budget, and seems likely to legitimately earn a spot as one the highest grossing films of the year.