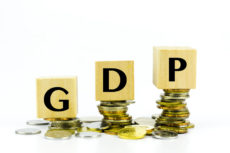 I take everything Donald Trump says with a grain of salt, including his claim that he believes the US can boost its GDP growth to 4% or even 5% a year. He’s quoted here saying he really believes it, but I hope it’s just more of his bluster.

Why would he think GDP could grow that rapidly? Perhaps because he thinks that as president, he can enact policies to create that growth. But if that’s what he thinks, his thinking is wrong and potentially dangerous.

Government policy best serves economic growth when government protects property rights, enforces rule of law (impartial enforcement of an objective set of laws that apply equally to everyone), and imposes minimal tax and regulatory costs on the private sector.

The best thing that government can do to promote economic growth is to protect people’s rights, and then step out of the way to allow individuals to engage in economic activity without government interference.

If President Trump and the Republican congress do that (and that’s wishful thinking on my part) and growth doesn’t hit 4%, might that tempt the president to push for policies that would stimulate the economy more? He might promote policies that (like President Obama’s stimulus policies) actually interfere with private sector activity and reduce economic growth.

I’m not overly worried about this. For one thing, most policies President Trump might propose would require congressional cooperation. But mostly, even though the president says he really believes we could hit 4% or 5% GDP growth, I don’t believe that he really does believe it.