Is a National Government Necessary for National Defense? 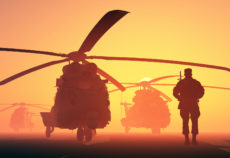 Gordon Tullock used to taunt anarchists by asserting that if the USA abolished its government, people would not have to worry about the Russians taking over the country because “the Mexicans would get here first.”

This little story actually incorporates a common objection to anarchy—namely, the idea that because, if a country abolished its government, other countries would not necessarily follow suit, the governments of those other countries would be free to, and would, simply take over the country that, lacking a government, also lacked an effective means of defending itself against takeover by a foreign power.

This thinking presumes at least two critical ideas: first, that defense of a population requires a government that rules that population; and, second, that if a government has the power to take over another country, it will do so.

As for the first assumption, it seems clear that a national government may prove an ineffective means of defense in any event, as many governments have demonstrated through the ages. Moreover, it is certainly conceivable that decentralized measures of defense, such as pervasive guerrilla groups operating more or less independently, might prove effective in preventing a foreign takeover.

As for the second assumption, the persistence of many small countries with weak governments, even in today’s world, certainly calls into question the idea that effectively defenseless countries cannot persist. Surely Brazil has the means to conquer Uruguay, but it does not do so. Surely Germany or France has the means to conquer Belgium, but neither does so. And so forth in regard to many other countries. Governments have various good reasons for refraining from such possible conquests.