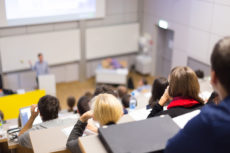 The Atlantic, not a place to find conservative or libertarian views, has a good essay from a self-proclaimed liberal on the events at Middlebury College. Just as a recap, a student group at Middlebury College invited Dr. Charles Murray to speak on his book Coming Apart: The State of White America, 1960-2010. Also invited to this event was Allison Stanger, a progressive professor at the college, to engage Murray in a public conversation following his talk. But no talk or conversation was allowed to take place. Instead, students shouted Murray down and then launched an attack. Here is how The Atlantic summarizes the events:

[Murray and Stanger] found themselves surrounded by protesters. The protesters—some of whom were wearing masks and may not have been Middlebury students—began pushing them. When Stanger tried to shield Murray, according a Middlebury spokesman, a protester grabbed her hair and twisted her neck.

Murray, Stanger and their escorts made it to a waiting car, but the protesters “pounded on it, rocked it back and forth, and jumped onto the hood. . . . One took a large traffic sign, attached to a concrete base, and placed it in front of the car to prevent it from leaving.

Finally, Murray and Stanger got away. They had planned to eat dinner at a local restaurant, but, upon learning that the protesters planned to disrupt their meal, left town altogether. Stanger later went to the hospital, where she received a neck brace.

Unbelievable. A liberal professor defending the idea of debate and speech is injured by a crowd of student radicals when she tried to shield a conservative writer from physical attack. What will be of our country in 10 or 20 years when these young “social justice warriors” start to take positions of authority in government and business? They fear discussing ideas and resort to violence when someone disagrees with them. They have a sense of entitlement that they are the only proper judges of which opinions are acceptable and which may be voiced. What awaits us??