The Neil Gorsuch Nomination: Does a Protestant Seat Matter? 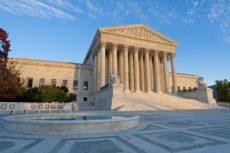 There has not been a Protestant on the Supreme Court since Justice John Paul Stevens retired in 2010. There has not been a Protestant nominated since 1990 when George W. Bush called upon David Souter. Right now there are five Roman Catholics and three Jews. Neil Gorsuch, according to the Washington Post, belongs to St. John’s Episcopal Church in Boulder, Colorado. I skimmed though the website and it appears to be typical liberal mainline Protestant Church. (It took me almost five minutes and multiple searches before I found the name “Jesus” even mentioned, but the main web page is filled with “social justice” stuff and ways members of the congregation can become involved with gun control initiatives. Very sad.) Just to put all my cards on the table, I am a Protestant, a member of the Presbyterian Church in America. Here’s my church home.

So does a Protestant seat matter? Jurisprudentially, no. The Roman Catholic jurists such as Thomas and the late Antonin Scalia have been wonderful in carrying the standard for judicial modesty and an approach to legal interpretation focused on the text and original intent of the ratifiers. Because the Court is not (or should not) be a policy-making body, I don’t buy the argument that “diverse” perspectives are needed and thus we must have a Protestant seat, or a woman’s seat, or a black seat, etc. What we need are intelligent individuals committed to putting aside personal views in order to interpret rather than make law. Give me Roman Catholic Thomases every day of the week over Protestant Souters.

As a Protestant and one involved in various national, conservative legal organizations, I am astounded at how Roman Catholics predominate in groups such as The Federalist Society. When discussing the matter with my Catholic friends I often hear the answer that the Catholic Church has a well-thought out theology (see the Catechism of the Catholic Church) that is appealing to the same sort of mind that is attracted to originalism and textualism in jurisprudence.

Unfortunately, liberalism so infected mainline Protestant churches in the early 1900s that what is left focuses on gun control and other secular matters (as exemplified by the St. John’s website linked to above) rather than the purpose and work of Jesus Christ coupled with a systematic theology grounded in Scripture. There are exceptions such as the Reformed parts of the Protestant Church that follow the intellectually rigorous Westminster Confession and the Heidelberg Catechism, but these are in the minority.

All too often I hear from liberal Protestants that we need to eschew theology and just focus on Christ. I am all for focusing on Christ, but who He is is a deep theological question (“theology” after all means the study of God). Is he just a gifted moral teacher whose example we should follow, or is he the Son on God who paid the penalty for the sins of His people? The anti-intellectualism that runs through liberal Protestantism and the triumph of liberalism are discouraging. This twin-headed monster is an important part of the explanation of why it is news that a conservative, non-Catholic has been nominated to the Supreme Court.

For lessons regarding the role of the Supreme Court in American Government, please see Chapter 13 of the Independent Institute’s widely acclaimed book: Crossroads for Liberty: Recovering the Anti-Federalist Values of America’s First Constitution, by William J. Watkins, Jr.