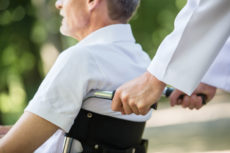 The Centers for Disease Control and Prevention (CDC), a federal agency, has reported the remarkable news that U.S. life expectancy has dropped for the first time since 1993. According to Mortality in the United States, 2015 (NCHS Data Brief No. 267, December 2016):

The one death rate which improved was for cancer. So, we are “winning” that war, at least relatively speaking.

The entire decrease was for life expectancy at birth. Life expectancy at age 65 was unchanged from the previous year. In other words, children and working-age people are bearing the burden of this decline.

However, the worst (by far) contributor to the decline was an increase in deaths attributable to Alzheimer’s disease, which (although not described in the data brief) is concentrated in people 65 and older. These deaths accounted for almost half (47 percent) of the decline in age-adjusted mortality.

The only way this terrible increase in the burden of Alzheimer’s disease could not have reduced life expectancy at age 65 is if the elderly have enjoyed significant improvement in outcomes for cancer and other diseases.

The next worst contributor to the decline was “unintentional injuries,” which accounted for just under one-third of the increase in the death rate, and must almost certainly be concentrated among those under 65. Suicides also increased significantly, although they do not account for a large absolute share of deaths. Researchers often include both unintentional injuries and suicides as related outcomes for people suffering mental illness and homelessness.

Given the extreme safety of our modern American environment, it would be remarkable if the increase in deaths due to unintentional injuries were concentrated among mentally healthy people. The data brief suggests the harmful behaviors that have been observed increasing among white men are also happening in the rest of the population, because the decline in life expectancy happened for both sexes and all races.