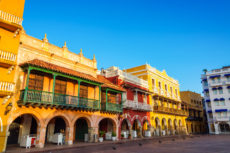 According to Colombia’s Agricultural Minister, Aurelio Iragorri, the measure is intended to achieve food security following price fluctuations over the past several months.

On this blog I’ve discussed how the price system is fundamentally important. Only via the mechanisms of private property rights, prices, and profit and loss can resources be allocated to their highest valued use.

But these facts of economics don’t always make people happy. As I explain to my principles students, sometimes everyday citizens and government officials look at the prices of particular items and don’t like what they see. They think some prices are either “too high” or “too low.” As a result, government will attempt to “fix” these “wrong” prices by imposing a price control. In the case that a price is deemed to be “too low,” governments will impose what’s called a price floor, setting the minimum price that consumers must pay for a particular good or service. The most common example of this type of price control is the minimum wage.

The price manipulation being imposed in Colombia is an example of another type of price control—a price ceiling. In this case, government believes prices are “too high.” So, officials set prices below what would be seen out in the marketplace.

The fact of the matter is that, whenever we manipulate the prices set out in the marketplace, negative unintended consequences are quick to follow. I’ve written repeatedly, for example, how those looking to assist the poor by raising the minimum wage actually harm the very workers they intend to help! I’ve discussed how ignoring the true prices of labor, goods, and other services led to the demise of a “progressive” vegan eatery in Grand Rapids, Michigan. Other examples are easy to find.

Alas, the price controls on food in Colombia will also have serious perverse consequences. By setting the prices of food products below what they would be out in the market, two important things will happen. First, consumers will see that the prices of food products are lower. Economics teaches us that when prices fall, consumers will buy more. Second, producers will see that, regardless of what happens to their costs, profits, or to the demands of consumers, their ability to raise prices is restricted. Since the price set by government is lower than the market price, producers will be willing to produce less than they were before and some may drop out of the market all together.

Taken together, this increase in consumer demand and decrease in supply lead to one thing–shortages. Serious shortages.

Ultimately, this doesn’t just harm producers. Consumers will have difficulty finding the products they want.

Apparently, Colombia has failed to learn lessons from its neighbors fellow South American neighbors, Argentina and Venezuela. While Argentina’s price controls are relatively recent, Venezuela has a long history of trying to manipulate market prices (and finding out that Adam Smith’s invisible hand packs quite the punch when you ignore it).

As a result of price controls in Venezuela, for example, consumers are forced to wait in unfathomably long lines to get the few basic necessities suppliers are willing to produce.

The shortages consumers face aren’t minor. In Venezuela, people can’t find enough toilet paper. In July, the price of tampons and other sanitary supplies jumped 1,800%. This price increase meant that the average Venezuelan woman would need to spend a third of her monthly wages on feminine care products.

The shortages caused by these types of price controls also lead to increases in crime as a result of black market operations. Since goods and services can’t be exchanged freely at market prices, black markets appear in order to provide a variety of goods to desperate customers. According to one source reporting on Venezuela, the difference between the market price and the “official” price set by the government is more than 560% for many goods. If someone wants to buy meat or poultry, they better be prepared to pay 1000% more than what they would have to pay in a free market.

When discussing the implementation of policies, it’s critically important for average citizens and government to understand the implication of their policy proposals. When it comes to the recent price controls in Colombia, we already know what the result will be—shortages, long lines, and black markets. We also know that the losers of this policy will, unfortunately, be the people of Colombia.