Geert Wilders Convicted of Hate Speech: Will It Happen Here? 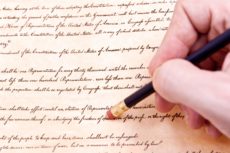 Last week, Dutch politician Geert Wilders was convicted of inciting discrimination and of insulting a group. The offending remarks came at a political rally when Wilders suggested that his country would be better off without any more Moroccan immigration. The New York Times has this news story here.

Many folks who read this website are likely in favor of open borders and profoundly disagree with Wilders’ position on immigration. That’s a fine and reasonable position to hold. But it is also within the bounds of human reason to hold a contrary position—especially in a western welfare state where Third World immigration has the potential to adversely impact the national budget, debt, and sundry other matters.

My point is this: We should shudder when the expression of a widely held political opinion, in a western nation with a history of freedom, is criminalized.

Articles 137(c) and 137(d) of the Dutch Criminal Code (starts on page 81) operate to prohibit making public intentional insults, as well as engaging in verbal, written, or illustrated incitement to hatred, on account of one’s race, religion, sexual orientation, or personal convictions. In essence, this law makes it a crime to honestly discuss political matters such as gay marriage, Islam, and immigration.

So how far are we from similar hate speech laws? Considering the clamor on college campuses for “safe spaces” where contrary ideas cannot be discussed, I’d say we are getting closer. If our universities discourage true free speech and are teaching this to students, we can expect that the next generation of leaders will likely prize the restrictions of the Dutch model.

Yes, we still have a First Amendment, but that parchment barrier did not stop the Federalists in 1798 from criminalizing speech challenging the polices of John Adams, and it will not stop adults raised on the milk of safe spaces from enacting their own Article 137 into law.