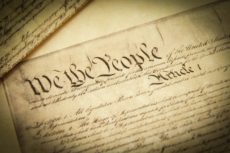 Thursday, December 15, is Bill of Rights Day, a time when citizens are told to celebrate the first ten amendments to the Constitution. Scholars such as Yale’s Akhil Amar describe the Bill of Rights as “the high temple of our constitutional order—America’s Parthenon.” Most of the public buys into this and believes that the Bill of Rights was a great gift from the Founders to posterity.

What we know as the Bill of Rights was nothing but window dressing meant to quiet critics of the Constitution without altering the structure of the document. Writing to Edmund Randolph, James Madison, the main architect of the Bill of Rights, indicated that his goal was to leave “[t]he structure & stamina of the Govt. . . . as little touched as possible.” George Clymer, a member of the first Congress elected from Pennsylvania, described Madison as “a sensible physician” giving his “malades imaginaires bread pills powder of paste & neutral mixtures to keep them in play.”

The state conventions that ratified the Constitution suggested over 200 amendments to the Constitution to cure structural problems. For example, Virginia offered a lengthy amendment on the judicial power. The proposal, in the main, would have limited the federal judiciary to the Supreme Court and various admiralty courts established by Congress. State courts would serve as the trial courts of the Union with the possibility of appeal to the Supreme Court. Virginians rightly feared that the federal judiciary would become an engine of consolidated government and sought to limit its power.

Massachusetts feared the new power of taxation in the federal government. Massachusetts, through the pen of John Hancock, offered a proposal that would have prohibited Congress from levying direct taxes unless (1) the funds could not be raised from imposts and excises, and (2) the states had been requisitioned for the money and had failed or neglected to raise the needed amount. As a check on the national government, Massachusetts wanted the states to retain some control on Congress’s demands for revenue.

How disappointed would Hancock and company be to see that today we average one representative for about every 750,000 persons. Do we have truly representative government? Not in the eyes of the patriots from Massachusetts who understood that true representation can only take place on a human scale.

Rather than sitting back today and mindlessly celebrating the “high temple” of our constitutional order, Americans should dust off copies of the substantive amendments proposed by the state ratifying conventions but ignored by Madison and the Federalist majority in the first Congress. (Massachusetts’ Amendments, Virginia’s Amendments, New York’s Amendments, North Carolina’s Amendments). (Also, in my new book Crossroads for Liberty: Recovering the Anti-Federalist Values of America’s First Constitution, chapters 15 and 16 deal with the amendments suggested by the state ratification conventions and the drafting the Bill of Rights.)

In these forgotten proposals we find many sound suggestions that will instruct us on how the powers of the federal government should be curbed and could have been circumscribed early on if Madison and his colleagues would have only listened.