Free to Burn the Flag

My grandfather retired as a Lieutenant Colonel from the United States Air Force. As such, he was given a full military funeral upon his death.

I remember that day better than most. It was bitterly cold and had rained non-stop for several days. I remember thinking that the men shooting during the “21 gun salute” were probably none too pleased about the TLC they would need to give their weapons later. I remember the pallbearers carrying my grandfather’s flag-draped casket through the cemetery and how their polished shoes were covered in mud.

Most of all, I remember the remarkable precision that several military personnel took to remove the flag from his coffin, fold it, and hand it to my father. After the funeral, my parents bought a special box for the folded flag where it remains to this day, in my dad’s office.

Without a doubt the flag holds a great deal of symbolism for many people. Perhaps this is why so many are in agreement with recent statements (or a tweet, rather) by President-elect Donald Trump. 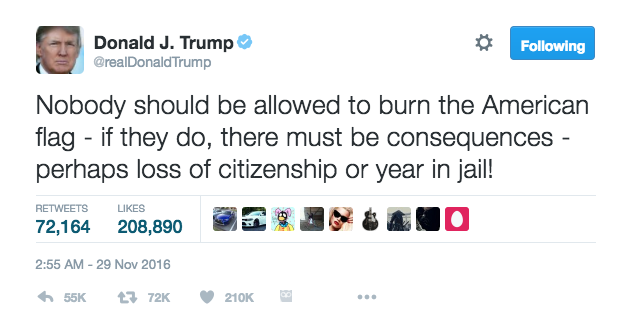 While many people have used this as yet another illustration of Trump’s radical rhetoric, this sentiment is not far off from what a great deal of Americans actually feel. Consider that, at the time of this writing, Trump’s tweet has been re-tweeted some 65,000 times and liked another 200,000.

Other polls find Americans largely favor bans on burning or desecrating the flag. When asked if they would favor a Constitutional amendment that would allow Congress and state governments to make it illegal to burn the flag, some 56 percent of respondents said they would support such an amendment.

When asked why flag burning should be illegal, people make several arguments. First, they say it’s offensive to past and present members of the U.S. military Second, and related, people will say that the flag “represents” those people who have “died for our freedom” or “American values” and, therefore, should be protected from destruction. Third, people generally decry flag burning as being un-American, un-patriotic, and so on.

None of these present very solid arguments.

All of these points boil down to the following logic, “I’m offended by flag burning.” As I tell my students, the response to the “argument” of “I’m offended” should be simple.

One’s personal feelings do not constitute an argument–ever.

In a post a few months ago, I wrote about Colin Kaepernick and his unwillingness to stand during the national anthem. In particular, I discussed how people’s anger, or lack thereof, really seemed to hinge on whether or not they view the flag as a symbol of the American people or the American government. I think a similar point can be made here.

Regardless of how one sees the flag, however, it should have positively no bearing whatsoever with regard to the discussion of flag burning.

Simply put, no one has the right to not be offended. We do, however, have the right to freedom of speech and expression. Prohibiting flag burning on the grounds of offense is a clear affront to our Constitutional rights.

Fortunately, the Supreme Court has been very clear on the issue of flag burning. In the 1989 case of Texas v. Johnson, for example, the SCOTUS struck down state laws that prohibited flag desecration, including flag burning. Writing in agreement with the majority, Justice Kennedy said,

For we are presented with a clear and simple statute to be judged against a pure command of the Constitution. The outcome can be laid at no door but ours. The hard fact is that sometimes we must make decisions we do not like. We make them because they are right, right in the sense that the law and the Constitution, as we see them, compel the result. And so great is our commitment to the process that, except in the rare case, we do not pause to express distaste for the result, perhaps for fear of undermining a valued principle that dictates the decision. This is one of those rare cases.

Though symbols often are what we ourselves make of them, the flag is constant in expressing beliefs Americans share, beliefs in law and peace and that freedom which sustains the human spirit. The case here today forces recognition of the costs to which those beliefs commit us. It is poignant but fundamental that the flag protects those who hold it in contempt.

I think Kennedy hits the nail on the head. Part of living in a free society means allowing for behavior we find objectionable, perhaps even highly offensive. While we may not condone it, we must tolerate it. The idea of revoking citizenship or incarcerating people for exercising their Constitutional rights should raise a proverbial red flag for all of those concerned with individual liberty.