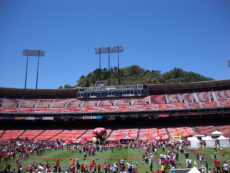 A couple weeks ago, San Francisco 49ers quarterback Colin Kaepernick came under intense scrutiny for refusing to stand up during the national anthem. As he plans to continue this behavior during the regular season, it’s unlikely the firestorm will subside anytime soon.

To say the responses to Kaepernick’s actions (or lack thereof) are mixed would be an understatement. To some, his actions are admirable. Others are so offended by his actions they are burning his jersey in protest.

When questioned as to why he chose to remain seated during the anthem, Kaepernick stated that it was his form of protesting what he perceives to be the mistreatment of blacks in the United States. In particular, Kaepernick pointed to the treatment of minorities by U.S. law enforcement.

Upon first hearing about this story I did two things.

First, I asked my husband, “who is this Colin Kaepernick person and why do people care?” (Sorry, not up to speed on all my NFL players.) Second, I looked to see what Kaepernick actually said in the press conference following the “incident.”

Quite frankly, I don’t care that Kaepernick chooses to sit during the national anthem, regardless of his motives—good, bad, or indifferent. He has absolutely every right to do so. My response to the argument that it’s “offensive” is the same response I give every time someone “argues” with the adult of equivalent of “it hurts my feelings.”

It seems to me, however, that whether or not people are upset with Kaepernick has a lot to do with how they view the flag. For some, the flag is a representation of the people of the United States and the freedoms we hold dear. For others, however, the flag represents the U.S. government, particularly the military and domestic law enforcement.

Over a year ago, I wrote a piece on the Pledge of Allegiance, its unsavory origins, and how the Pledge is the antithesis of the freedoms it purports to promote. I argued that holding the values of freedom dearly is infinitely more important than standing up, holding your hand over your heart, and robotically reciting words to a piece of fabric.

Based on the reactions to that piece, you would have thought I’d have slapped someone’s mother. How dare I not say the words and respect the flag! Don’t I know that people died for my freedom? If I don’t like America, I should move!

The fact of the matter is, it’s easy to see that the Pledge of Allegiance and the national anthem are more symbols of the U.S. government than its people. Perhaps at one point in history, the flag and the traditions surrounding it served as reminders of freedom and liberty, but I think it’s much harder to make that case now.

Consider, for instance, what Colin Kaepernick sees when the anthem is played at practically every NFL game. What happens? The flag is presented and a presentation is made. To whom? Not to freedom, not to the people of the United States, but to the U.S. military or the “brave men and women in law enforcement.” Sometimes it’s both.

Given the fact that the flag is now often synonymous with the military or police, and the checkered history between police and minority groups in the United States, I can’t blame Kaepernick for wanting to take a seat. To him, the anthem isn’t a song celebrating freedom, it’s a glorification of a group of people he sees as abusive.

I find it difficult to fault him for that.