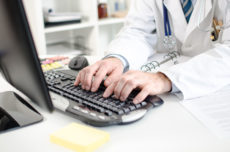 Yale University professors Zach Cooper and Fiona Scott Morton have published a new article reporting their research on “surprise” medical bills. These occur when a patient goes to an in-network hospital but is treated (without his knowledge) by an out-of-network doctor and receives an unexpected bill from the doctor (or doctors).

Examining 2.2 million claims from a database of privately insured patients, Cooper and Morton found that over 99 percent of visits to emergency rooms were at in-network hospitals, but over one-fifth of those visits generated a claim from an out-of-network doctor. At the extreme, one patient faced a bill of almost $20,000.

Professor Cooper (with whom I am slightly acquainted from conferences) thinks a solution lies in state laws making hospitals price all services, including physicians’, in a bundled contract with insurers. How much doctors charge would then be subject to private negotiation between doctors and hospitals.

Within the current system, it is a reasonable solution. However, it invites the question: Why are hospitals, physicians, and insurers not already operating like this? The answer must lie in the overly complex regulatory morass governing how these actors interact with each other.

No other service business would try to get away with this. Remember when President Obama was trying to convince us that the Obamacare health-insurance exchanges would operate like Expedia or Travelocity? It is laughable in hindsight. Nevertheless, while most people agree that actual airline travel (which is regulated by the federal government) is miserable, buying a ticket to fly is a convenient and transparent process. A passenger does not get a bill from the co-pilot a month after his flight, stating the co-pilot was not in the airline’s network, and the passenger must pay extra!

Bundled pricing is a characteristic of a normally functioning market. In health care, that invites less, not more regulation.