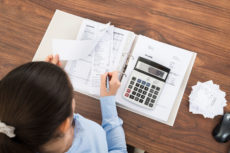 The unexpected election of an at least nominally Republican president, along with Republican control of both Houses of Congress, presents a unique opportunity for the incoming Congress to make meaningful reforms to the tax system. One major problem has been the over-taxation of corporate income. Another is the under-taxation of carried interest.

In brief, I propose:

At present, corporate income is taxed at 35%, and then the dividends that are distributed from the after-tax income are taxed again at rates as high as 23.8%, counting the 3.8% surtax on investment income that was imposed in 2013. This makes the total tax burden as high as 1 – (1 – .35) (1 – .238) = 54.0%, without even counting state and local taxes. This total tax rate is clearly too high, driving US corporations out of the country, and discouraging conversion from pass-through partnership or S-corporation status to big-league taxable C-corporation status.

Currently, “qualified” dividends (those that have been paid by taxed US corporations) are taxed at approximately half the personal income tax rate. Grabbing part of the tax on investment income at the company level and part at the investor level does make sense, since it reduces incentives to avoid taxes at both levels, gives investors in lower tax brackets at least some of the advantage of their lower marginal personal tax rates, and reduces the chance that investment income will somehow escape taxation altogether. At present this is done by means of an opaque calculation using the Line 44 Qualified Dividends and Capital Gain Tax Worksheet. However, it would be far easier, more transparent, and roughly equivalent, simply to add half of qualified dividends (and all of non-qualified dividends) to taxable income, and to dispense with the arcane Line 44 Worksheet altogether.

Retained earnings that are not paid out as dividends raise the value of the firm, and therefore generate capital gains. When these are realized by the investor, half of them should be added to ordinary income if they are “qualified” by being from corporations that have already paid the US corporate income tax. But if they are from pass-through partnerships or Chapter S corporations they should be fully taxable, just like non-qualified dividends.

If corporations buy back stock in lieu of paying dividends, capital gains are again generated. In the 1970s and 1990s, when long-term capital gains received much more favorable tax treatment than dividends, stock buy-backs were actually comparable in magnitude to dividends. The proposed equal treatment of dividends and capital gains would make such a maneuver pointless.

An additional rationale for the favorable treatment of long-term gains has been that capital gains partly represent inflation on the original investment, that should not be taxed. However, this simply means that investors should have the option of indexing the capital gains basis for inflation—or deflation.

Capital gains from collectibles should not be given preference over gains from other investments as at present.

Both 2016 presidential candidates agreed with Warren Buffett that the “carried interest” loophole should be closed. This loophole fictitiously treats earnings-contingent compensation to hedge fund and private equity fund managers as long-term capital gains. The proposed elimination of the favorable treatment of long-term gains therefore automatically closes this loophole.

Why Tax Salaries and Investment Income at the Same Rate

Partnerships and closely-held S-corporations often have the choice of disbursing income to their principals either in the form of dividends or salaries and bonuses. Taxing the two at different rates generates an easy way to avoid the higher rate. If some rates are too high, they should just be straightforwardly reduced rather than shot full of loopholes.

Likewise, partnerships and S-corporations at some point may have the option of converting to taxable C-corporation status. In order not to create an easy way to avoid the higher tax, the two should again be taxed at the same rate for at least top-bracket taxpayers, to the extent that that is possible.

Taxing income that is saved and then also the investment income on those savings means that future consumption funded by current savings is taxed at a higher rate than current consumption itself. This inefficiently distorts the savings decision against saving. This distortion can be removed by sheltering income that is saved from taxation until it is eventually dissaved. Originally, only employees at large firms with tax-sheltered funded pension plans could escape this double taxation of future consumption. In recent decades, however, IRAs and 401(k) plans have expanded eligibility for tax-sheltered savings.

These tax-sheltered savings plans are very beneficial, but unfortunately they are restricted to retirement savings, with a substantial penalty for withdrawal before age 59. Furthermore, there are inflexible restrictions to how much one can save in this form per month. However, there is no economic reason for these restrictions. Saving for future consumption should not be double taxed, regardless of whether it is intended for retirement, for education, for purchase of a house or car, for contingent medical expenses, or simply to take a big vacation later in the year.

In order to ensure that savings have really been legitimately invested, and that withdrawals are duly reported as taxable earnings, these tax-deferred savings should be restricted to arms-length institutional vehicles such as bank accounts, brokerage accounts, and REITs. There is no reason employers should be involved, other than to provide tax-reported payroll deductions as a convenience to their employees.

The ability to defer taxes on unrealized capital gains provides at least partial tax deferment for savings that do not thus qualify for fully tax-deferred treatment.