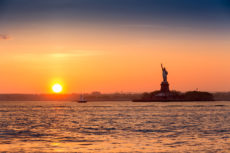 Both Donald Trump and Hillary Clinton called for innovative solutions for what ails America. For the former it was a new fence on our southern border that will supposedly be funded by Mexico; for the latter it was free (i.e., taxpayer subsidized) college tuition. Fresh ideas, they told us, could “make America great again” and render us “stronger together.”

Neither campaign stopped to consider that it was an innovation that led to our current woes, one that most Americans view as their country’s greatest contribution to political science: the U.S. Constitution.

Undoubtedly, blaming America’s “paramount law,” as Chief Justice John Marshall called the Constitution, seems like scandalous heresy. Americans are taught that their fledgling nation was going down the tubes until ratification of the Constitution in 1788 ensured that the United States of America would survive the failures of the Articles of Confederation. The standard narrative portrays the Federalists, the proponents of the new Constitution, as visionaries and paints the Anti-Federalists, who opposed ratification, as men of little faith with no concept of future American greatness.

What the conventional tale leaves out are Confederation’s significant accomplishments.

The primary goals of the Confederation were to defeat Great Britain and to preserve self-government in the thirteen states. The former was accomplished on October 19, 1781, when Lord Cornwallis surrendered his forces to George Washington at Yorktown, Virginia. The latter was enshrined in Article II of our first charter of union: “Each state retains its sovereignty, freedom, and independence, and every power, jurisdiction and right, which is not by this Confederation expressly delegated to the United States, in Congress assembled.”

The Patriots who fought for Independence pledged their lives, fortunes, and sacred honor so that the states could govern their own affairs rather than suffer the rule of a distant central government. As historian Gordon Wood has observed, the question of where sovereignty resided “was at the heart of the Anglo-American argument that led to the Revolution.”

The much-maligned Articles of Confederation enabled the states to defeat a superpower and ensure the right of the people to make their own laws in state and local assemblies. With these victories the Articles must be considered a great American success story.

It is true that the Articles of Confederation were not perfect. Their most glaring defect was the lack of any provision of an independent revenue source for Congress. This problem came close to being remedied by a proposal to grant Congress the power to collect a tax on imported goods. The Articles’ unanimity requirement, however, permitted one recalcitrant state (Rhode Island in one effort and New York in another) to torpedo this idea.

Unfortunately, although the Philadelphia Convention was tasked with revising the Articles of Confederation, it abandoned the confederative model and many of the Articles’ pro-liberty provisions, including term limits for delegates to Congress; supermajority voting requirements to appropriate money, borrow money, and declare war; and formal recognition of the states as sovereign entities best suited to govern their internal affairs.

Many scholars would argue that the Constitution provides sundry essential protections but that the courts and national legislators undermined them with their erroneous interpretations. This argument is both appealing and plausible until one reads the Anti-Federalist writings dissecting the Constitution.

The Anti-Federalists accurately predicted that Congress would interpret the General Welfare Clause and the Necessary and Proper Clause in ways that allow it to legislate on subjects beyond its constitutional purview. They foresaw the Supreme Court becoming an unaccountable body that acts as a super-legislature rather than a neutral umpire calling balls and strikes. These prophets also recognized that the states would be rendered impotent and dependent on the national government for revenue and direction.

One might complain that it was foolish for the Anti-Federalists to throw rocks and predict failure rather than to offer concrete solutions. What is forgotten is that Anti-Federalists in various state ratifying conventions offered more than 200 substantive amendments for the national legislature to consider during its first meeting. To secure ratification, Federalists promised to review them and recommend changes to the constitutional structure. Congress did send a bill of rights to the states—at the insistence of the Anti-Federalists—but it ignored proposals to limit national power.

This misunderstood chapter in our national history teaches us that political innovation does not always make America great or stronger together. All too often it spoils a legacy that should be preserved. Rather than tuning in to the fallout from the presidential race, Americans would be better served by dusting off the Articles of Confederation and the Anti-Federalists’ writings. In them we can recover the fundamental principles of liberty and self-government.