Trump and Clinton Are Both (Partly) Right on Economics

Neither of the major party presidential candidates is a font of economic wisdom. However, if you look hard enough, you can find a glimmer of truth in some of their rhetoric. In this post I’ll analyze two of the issues raised by the candidates, showing how each contained some truth but also confusion.

At one point during the third presidential debate, Trump said he just left “some high representatives in India,” and that that country was growing at 8 percent, while China was growing at 7 percent, which for them (he claimed) was “a catastrophically low number.” In contrast, the United States economy has only been growing at “around the 1 percent level.”

Now on Twitter and other online forums, economists roundly mocked Trump for being unaware of the concept of economic “convergence,” in which standard models predict that poorer countries grow faster than rich countries. The economists’ critique is valid as far as it goes: Trump seemed to be claiming that India and China are growing faster than America merely because they enjoy better government policies, and not because they are starting from a lower level of per capita real income.

However, Trump was not wrong for suggesting that the U.S. should have enjoyed—at least temporarily—growth rates of even 8 percent in the wake of the Great Recession, if indeed the government (and Federal Reserve) had enacted sound policies. Historically, the U.S. economy rebounded very strongly after a bad recession, at least partially making up for the lost output of the previous downturn. (We can quibble about what the right benchmark is for “sustainable development,” and whether too-fast growth during the boom paves the way for a crash. I am here talking about the standard statistics and framework of the business cycle reported by the Bureau of Economic Analysis.)

The following chart from the St. Louis Fed shows the change in real GDP in percentage terms over the prior 12 months:

The chart illustrates just how anemic the U.S. economy has been, in the wake of the Great Recession. Since the ostensible recovery began in the summer of 2009, only rarely has year-over-year U.S. real GDP growth bounced above 2.5 percent, and it has centered around 1.5 percent.

In stark contrast, going all the way back to World War II, GDP growth following a recession (denoted in the chart by the shaded regions) soared, albeit just briefly. Look, for example, at the early 1980s. In the first quarter of 1984, real GDP was 8.6 percent higher than it had been a year earlier.

The disparity in recovery growth rates is even more alarming when we consider that the depth of the Great Recession exceeded that of any other recession in the postwar era.

In summary, although Trump’s comparison with India and China overlooked an important difference, even so it was not wrong for him to criticize lackluster U.S. growth rates. If the rhetoric from Obama and Clinton partisans were correct—namely, that the Great Recession had been caused by awful Republican policies which were fixed under Democratic rule—then we would have seen at least a few quarters of very high economic growth. Yet we have seen no such thing.

Clinton on Tax Cuts and Debt

Free market economists are deeply disturbed by Trump’s rhetoric on trade. However, Hillary Clinton—catering to a progressive base who had supported Bernie Sanders—can’t very well hit Trump too hard on this front. Many of the people she needs to vote for her are bitterly opposed to the Trans-Pacific Partnership (TPP), for example.

This is why Clinton has instead focused on taxes, claiming that Trump’s massive tax cut plan would irresponsibly repeat the same failed policies that led to the financial crisis.

Now on the face of it, this claim is absurd. Letting private individuals keep more of their money cannot be an explanation for why the U.S. economy experienced a crisis in the fall of 2008.

Also, contrary to the Clinton campaign’s talking points, my position here isn’t ideological. Even Christina Romer (with co-author David Romer), who was the first chair of the Council of Economic Advisors to Barack Obama, published a paper in a top economics journal arguing that tax hikes significantly hurt economic growth. So the bald claim that large tax cuts will cause an economic crash defies both common sense and peer-reviewed economics.

However, Hillary Clinton does have a point when she goes on to argue that her plan “pays for itself,” whereas Trump’s plan would significantly add to the federal debt. Although one can quibble with the assumptions underlying the model, the Committee for a Responsible Federal Budget (CRFB) offers a worthwhile projection: 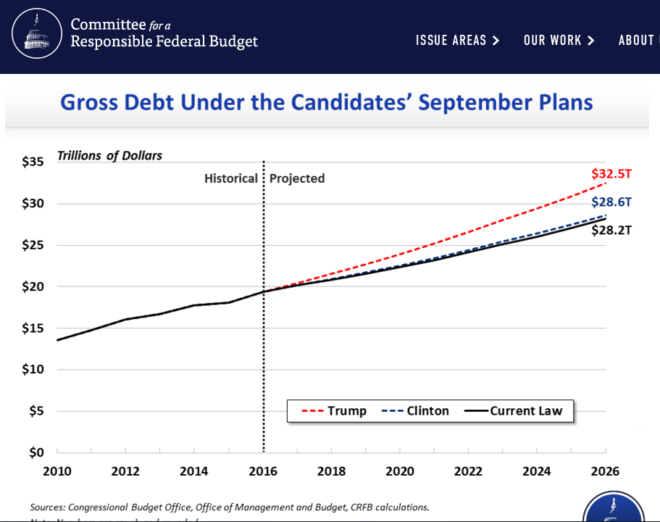 To repeat, I suspect that the model underlying this projection is quite Keynesian, and does not correctly forecast just how damaging Clinton’s tax hikes on upper income earners would be, nor does it correctly assess the supply-side boost to growth coming from Trump’s plan.

Even so, the Clinton team does have a point when they say that Trump’s plan—if we take his tax and spending promises seriously—would cause the Treasury debt to grow faster than the status quo, and to that extent is problematic.

One of Milton Friedman’s important contributions to the policy debate was his insight that the real issue is the level of government spending, not how Uncle Sam pays for it. To a first approximation, if the government spends an extra $100 billion, whether it pays for that spending explicitly through current taxation or by issuing more debt, ultimately U.S. taxpayers are footing the bill. This is because the extra debt is a burden on taxpayers down the line. Citizens who are versed in economics should not be fooled into thinking that a $100 billion “tax cut” with no corresponding spending reductions is a genuine boon from the government. The Treasury is effectively giving you a “gift” that it pays for by running up your credit card bill.

To be sure, Hillary Clinton’s proposed solution—of growing the government and “paying for it” by socking the relatively rich—is arguably a cure worse than the disease. But at least it has the virtue of making citizens feel the brunt of the government’s spending in the near term, rather than foisting it onto future taxpayers.

On the issue of economic growth and tax cuts, Donald Trump and Hillary Clinton commit some basic economic mistakes, but they also have a germ of truth in their critiques of each other’s plans. Unfortunately, what this ultimately means is that no matter who wins, Americans are going to suffer from economically pernicious policies.