SCOTUS, the Presidential Debate, and The Formula 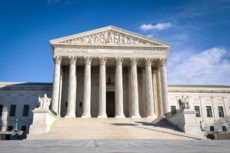 The Supreme Court will be a major issue in tonight’s presidential debate. Justice Scalia’s seat is just part of the story. At 83 years old, rumors have long been swirling about the health of Ruth Bader Ginsburg, a solid vote for the liberals. Moreover, Anthony Kennedy, a Reagan appointee who often votes with the left-wing of the Court, is 80. Thus, the next president will likely appoint three justices.

Trump will argue that if he is allowed to fill these seats with reliable jurists who believe in judicial restraint and strict construction of the Constitution, then a conservative majority might exist for the foreseeable future. (Of John Roberts, Samuel Alito, and Clarence Thomas, the latter is the oldest, at the relatively young age of 67). Say good-bye to the 5-4 losses that Trump will promise, and say hello to 6-3 victories. But the GOP does not have a good track record of nominating justices favoring judicial restraint and strict construction. Harry Blackmun, David Souter, and Anthony Kennedy are the most glaring failures of Republican presidents in the last 50 years.

What is more interesting (at least to me) is that libertarians and conservatives (of the non-neocon variety) have been told election after election that, yes, Bob Dole, George Bush, John McCain, and Mitt Romney are not perfect paragons of limited government and individual liberty, but that because the Supreme Court is so critical, we must hold our noses and pull the lever for the GOP candidate. The lesser of two evils and control of the Court was “The Formula” used to encourage us not to vote for third parties despite our disdain for the GOP nominee. (I personally rejected The Formula some years ago and have been voting for third parties in presidential elections as a matter of principle and catharsis.)

But is The Formula genuine? The neocons have now abandoned The Formula they have been peddling to the rest of the Right and jumped ship on Trump. Don’t misread me here: My point is not to defend or endorse Trump, but to question whether the neocon establishment ever believed in The Formula. In every presidential election for the past 30 odd years we were told that the Court hangs in the balance. If all members of the Right don’t vote GOP, the Jacobins will control this powerful instrument of jurisprudence. In this election, the standard hyperbole might actually be true. Three seats = a big deal.

So, what are your thoughts? Was The Formula a disingenuous effort to persuade libertarians and conservatives to vote GOP, or is Hillary the lesser of the two evils and thus the neocons earn absolution for their jettisoning of the GOP nominee?