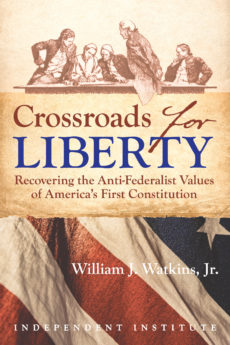 Is the U.S. Constitution the best possible charter a nation could ever conceive? Many people seem to think so, but some of the greatest patriots of the Founding Era would have disagreed—vehemently. Indeed, men like Patrick Henry, George Mason, and Richard Henry Lee (among others) thought the Constitution’s flaws would become the republic’s undoing. In fact, many of their predictions have come true: Americans labor under a bloated and abusive federal bureaucracy, the national debt has grown to ominous levels, and many people believe the system is “rigged.”

The forgotten insights and proposals of the Constitution’s early critics—and their current relevance—come alive in the new Independent Institute book, Crossroads for Liberty: Recovering the Anti-Federalist Values of America’s First Constitution, by William J. Watkins, Jr.

The “crossroads” in the book’s title are the Philadelphia Convention of 1787 and the state ratifying conventions. In the 1770s and 1780s, the Anti-Federalists (so called because they opposed the Federalist Party and its vision of a “strong” national government) feared the Constitution would weaken political representation and liberties for ordinary citizens. Some urged the adoption of the Bill of Rights—although other Anti-Federalists worried that the inclusion of those ten amendments opened the door to a power-hungry and pernicious central government. Their original hope was to amend the nation’s first constitution, the Articles of Confederation, not end it.

Crossroads for Liberty offers a fresh perspective on a misunderstood turning point in American history. More than this, it celebrates the achievements of the Articles of Confederation (including its role in winning the American Revolution) and reveals the worldly wisdom of the Anti-Federalists. Those patriots, Watkins explains, gave the nation scores of concrete proposals that, more than two centuries later, offer the best hope for curing our political malaise and reviving the seeds planted by the Declaration of Independence.

“Their principles can guide us back to stability and limited government,” Watkins writes. “Let us open our ears and hear what they have to say.”

This piece first appeared in the 10/18/16 issue of The Lighthouse. To subscribe to this free weekly newsletter or other notices from Independent Institute, enter your email address here.