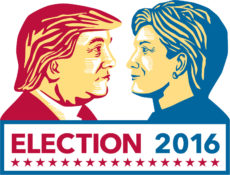 This week we saw the first presidential debate between Democratic nominee Hillary Clinton and Republican nominee Donald Trump. Despite knowing better, I watched the whole thing. For over 90 minutes I watched as the two candidates went back and forth, offering generic, unclear policy prescriptions, took jabs at one another, and offered unnecessary personal anecdotes in an attempt to make themselves relatable to a broader audience. It’s the type of political show that I frankly despise.

But the worst part of the debate for me was listening to the candidates propose patently backward economic policies. The sad truth is that any good economics professor could construct a semester-long course based on the fallacies presented during the debate. To make matters worse, said professors would have enough material to fill the course within the first five minutes.

Instead of going through all these points, however, I thought I’d highlight a few.

Donald Trump claimed throughout the debate that trade agreements have been a bad deal for the United States. In particular, Trump stated that NAFTA was one of the worst trade deals ever created. To say these statements are inaccurate is a gross understatement. In fact, U.S. unemployment has declined sharply since NAFTA took effect. In the automotive industry and in manufacturing–areas in which Mr. Trump said jobs have been lost–employment has actually increased. In fact, employment rates have grown five times faster in these industries following NAFTA than in the years prior to the agreement. The aversion to free trade didn’t stop there, however. This is despite the fact that any principles textbook explains that trade is beneficial for everyone, both rich a poor countries alike. It all comes down to the very basic, but very powerful theory of comparative advantage. When people specialize and trade, wealth increases all around.

Hillary Clinton mentioned this within the first 60 seconds of her first answer. Economics teaches us (on day one in my principles classes) that there is no such thing as “free.” Everything involves what economists call “opportunity cost.” That is, for every choice we make, we must necessarily give up something else. To call for something to be “free” is at a minimum ignorant, if not outright disingenuous. This is not to mention the fact that numerous people have pointed out that “free college” won’t fix the problems of the U.S. educational system. (See here, here, here, and here for examples.)

Clinton mentioned this as well during her first answer. We’ve all heard the statistic that a woman “earns only $0.77 for every dollar a man earns.” This statistic is not only misleading, but the data indicates that this gap simply isn’t there when we control for things like experience, hours worked, and education. In fact, women may be more likely than men to get jobs in certain fields, and studies have found that women often earn more than men with comparable skill sets, particular when it comes to part-time work (I’ve written on this topic a lot. See here and here).

Both Clinton and Trump seem to think this one is a good idea, despite the fact that such a policy could be economically detrimental to many businesses and put women at a gross disadvantage when it comes to hiring decisions and salaries. Simply stated, such a policy would make women more expensive to hire. When something becomes more expensive, people buy less of it. (This is literally the first law of demand. Again, something learned within the first two weeks of any introductory economics course.) In this case, women of reproductive age become more expensive, so employers will hire fewer of them. The result is fewer women working and women earning lower salaries (see here, here, and here for more detailed explanations).

Among other things, we could discuss police militarization, race relations, and the hawkish stance of both presidential candidates. We could discuss their feelings about accessing private information of both individuals abroad and U.S. citizens at home. We could discuss other polices related to infrastructure or the silly notion that either candidate could “create jobs” once in office. But I’ll save that for another blog.

Letting my students pick which one appealed to them the most, we discussed one of these issues in my classes the day after the debate. I used the debate as an opportunity to teach my students about not only about economics, but also the importance of being informed with regard to policy issues. I invited them to bring other policy suggestions to class, offering them classroom time to delve more deeply into current events.

If there’s a silver lining to this election, perhaps it’s that it has given me and other economists a list of “teachable moments” ten miles long. But, oh, how terrible to see so much bad economics coming from the people who are up to run our country.

How sad is it that both our presidential nominees would fail my principles class?