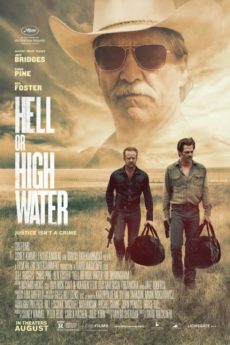 I didn’t fully recognize the remarkably pervasive anti-gun statement embedded in the well-received film Hell or High Water until my morning jog the following day. The message is so subtle, so nuanced, and so expertly executed, this movie could be used as a textbook case for how narrative filmmaking can promote policy positions. And it could well be an Oscar winner.

Hell or Highwater chronicles Toby and his ex-convict brother as they rob unsophisticated backwater banks in small West Texas towns. Their goal is to steal just enough money to pay off the mortgage on the family farm and Toby’s unpaid child support. The movie has been billed as a modern-day Western.

Hell or High Water is a very well-crafted movie, and I was actively engaged throughout. While I haven’t found any written or reported evidence that the directors and screenwriters intended to write an anti-gun or pro-gun control movie, their final product carries a very strong anti-gun message. Given the prominence of guns in the film, and the intentional marketing strategy casting it as a contemporary western, the film is not just anti-violence. It intimately integrates gun violence into the story and this is critical to the character arcs of the lead characters. Hell or High Water is a textbook case for how political messages can be and often are embedded in a well-crafted narrative film.

For readers interested in more on gun rights in film, I have explored this issue in a previous blog post on Free State of Jones. (In this movie, gun rights are supported, albeit unintentionally, by the narrative.)

Also, the Independent Institute has published numerous books on the second amendment and gun rights. See details on the books by the prolific legal scholar Stephen P. Halbrook here, here, and here.