Should Conservatives Give Up on Narrative Filmmaking? 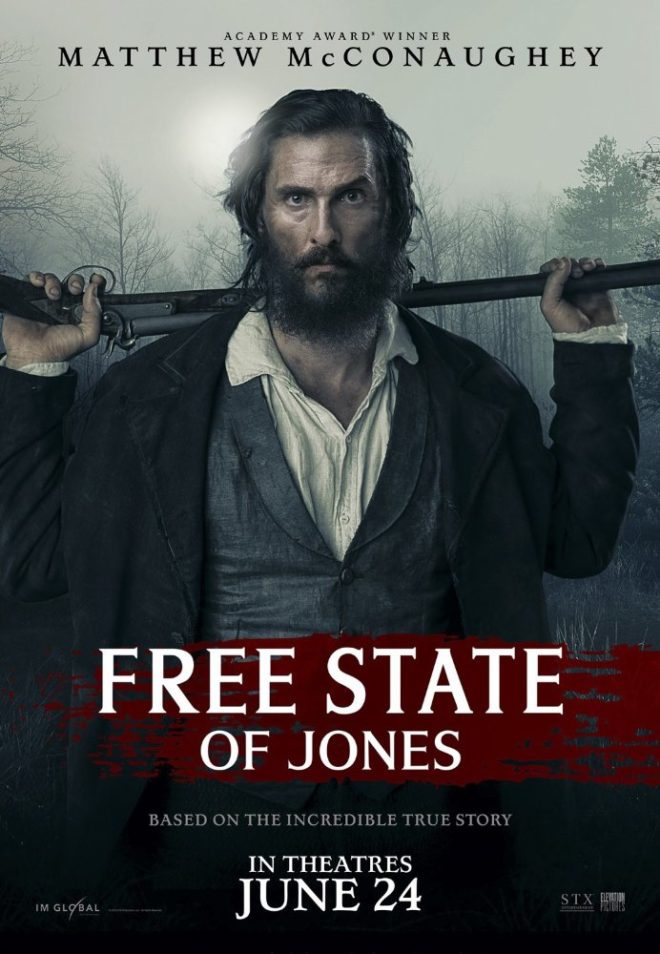 In a pivotal scene in the film Free State of Jones, three white men are chasing the recently freed slave Moses down a dirt road in immediate post-Civil War Mississippi. What is notably missing from Moses’s hands is a gun, a symbolic feature embedded so thoroughly in the narrative of the film that it could be considered a pivotal supporting player. The next scene shows Moses’s feet dangling in mid-air after he has been lynched for his “crime” of registering free blacks to vote.

From my vantage point in the movie theater, this sequence dramatically showed the civil rights foundation for the Second Amendment, or at least an artistic validation of the main theme behind books such as Stephen Halbrook’s Securing Civil Rights: Freedmen, the Fourteenth Amendment and the Right to Bear Arms. This is all the more remarkable because, from what I can tell, nothing in the background of the actors, producers, director, or screenwriters suggests they are vocal Second Amendment advocates (although I could be wrong and invite readers to shed any light they may have on this). From the director’s point of view, I am sure these sequence are intended to show the human consequences of the terrorism unleashed upon African-Americans as whites established American apartheid in the South after emancipation through Jim Crow laws.

The scene contrasts stylistically and artistically with another movie now playing in theaters: AmeriGeddon. The film, directed by veteran actor Mike Norris, is the son of well-known conservative actor/producer/martial artist Chuck Norris. The film was produced by and features Gary Heavin, a Texas businessman and Ernst & Young Entrepreneur of the Year (2004) who began producing “movies that make a difference.” Presumably that means conservative in focus and theme.

Nothing in AmeriGeddon is nuanced or subtle. The directing, dialogue, and plot clobbers viewers with its core message that American political leadership is a Trojan Horse for a global terrorist cabal subverting its values and freedoms under the noses of an unsuspecting and inattentive public. Donald Trump meet Agenda 21 and, for good measure, throw in Walker Texas Ranger to kick some Russian and Chinese butt.

The film fails on many levels, some of them related to surprisingly low production values and inattention to detail (given the experience of the principals behind the production). Films need not have big budgets or be flawless to be good, compelling, or commercially successful. The Shallows, with a production budget of $17 million, opened around the same time but generated $54 million in domestic box office revenues and opened to strong reviews. Good films, however, must have a good story and directors, producers, and screenwriters who know how to translate that story onto the big screen. This is where I think The Free State of Jones succeeds and AmeriGeddon fails.

Storytelling is an art, and a good storyteller can convey a point with subtlety and finesse, often without the reader, listener, or viewer even explicitly knowing which values are in play. Not everyone would take the scene in which Moses is lynched as a statement in favor of the Second Amendment, although advocates of self-defense and gun rights can and should. In another scene in Free State of Jones, which is based on a true story, Newton Knight (Matthew McConaughey), the white protagonist, leads a group of freedmen into the Jones County, Mississippi, courthouse to vote. He’s carrying a rifle. When the white men controlling the town try to intimidate the free blacks into not voting, Knight makes it clear he will use the gun to protect their right to vote.

Symbolically, largely through visual storytelling—showing, not telling—the role of the gun as self-defense against oppression becomes pivotal to a story about real historical events, even without the lead characters saying anything explicit about the gun. The visual impact of the gun complements the dialogue and action, increasing the tension and adding to the film’s forward momentum.

In contrast, AmeriGeddon’s directors and screenwriters use a proverbial jack-hammer to drive home their pro-gun, global conspiracy message, overwhelming the storytelling elements of the film. The movie opens up with the lead character implausibly berating a congressional committee for not taking seriously reports that supposedly show America’s vulnerability to terrorist attacks and an impending takeover of the country. In another sequence, an elite military unit trains for a martial law scenario by seizing guns from everyday patriots identified by the pro–Second Amendment signs on full display on their doors. Because the ideas driving the movie are so obvious, movie goers can predict virtually every step in the scene. The film has little suspense, and the tension is driven by familiar plot devices.

This approach contrasts with conservative and libertarian documentary filmmaking, a medium that embraces ideas as a central and often a visible aspect of storytelling. Dinesh D’Souza’s 2016: Obama’s America is a case in point, generating $33 million in box office revenues on its way to become the highest grossing conservative documentary despite being panned by critics. Korchula Production’s well-received documentary on the precarious state of free speech in America, Can We Take A Joke?, may achieve commercial success for similar reasons—the right medium for the message.

Nevertheless, the scenes in Free State of Jones show that pro-liberty values and ideas can work in narrative film. Libertarian- and conservative-minded producers and writers, however, need to pay more attention to crafting their stories and recognizing that a well-drawn story will do a much better job than lecturing if they want to reach a broad audience.

A final note and request: Please share in the comment section of this blog any recommendations you may have for well-crafted narrative films that promote liberty, freedom, and limited government. I’ll do my best to watch them.