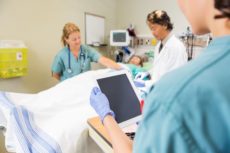 What is remarkable is that only 48 percent of procedures (such as joint replacement) that can currently be done in either setting are actually done in ASCs. Assuming it would not be appropriate for three percent of surgeries to be done at ASCs (due to complexity), the study estimates that shifting the balance of procedures to ASCs would save yet another $38 billion. Plus, shifting other procedures, not currently done at ASCs, would save another $56 billion.

Why are private insurers and employers leaving this money on the table? The study notes that hospitals are concentrated and have stronger bargaining power over payers than do ASCs. So, why do not more ASCs open up? Because ASCs are often owned by physicians, laws discriminate against them versus non-profit hospitals. Although federal laws do not discriminate against ASCs as badly as they do physician-owned hospitals, laws in some states prevent new ASCs from entering markets to compete against hospitals. (See this New Jersey law, for example.)

Nevertheless, insurers and employers should be able to do a better job of getting rates down. The California Public Employees Retirement System (CalPERS) reduced costs of joint replacement, cataract surgery, and arthroscopy by $6.4 million in two years by implementing “reference pricing,” whereby high-quality settings with a wide range of fees were paid the same reference price (based on the low-cost providers’ fees). If patients wanted higher-cost facilities, they paid the difference out of pocket.

CalPERS’ reference pricing started in 2008. How can it not be the norm today? Evidence continues to build that health insurance, as it is currently designed in the United States, does not add value.