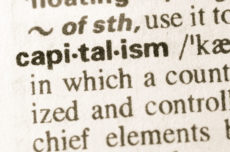 May 29 marks the centennial of Arthur Seldon’s 1916 birth. Called “one of the most influential economists of the late twentieth century,” for over three decades he was editorial director of the London-based Institute of Economic Affairs, which The Economist said, “brought to the lay reader the ideas of all the leading free-market economists and thinkers of the day.”

Seldon edited 350 papers, monographs, and pamphlets, and penned 28 books and monographs and more than 200 essays and articles, generating a seven-volume set of collected works.

In such a vast body of work, one cannot easily winnow out the best of Arthur Seldon’s words. Therefore, consider some of the wisdom in just one of his books—Capitalism (1990), winner of the Fisher Arts Literary Prize:

Capitalism . . . creating high and rising living standards for the masses without sacrificing personal liberty speaks for itself. Only the deaf will not hear and the blind will not see.

Even bad men are led by the market process to do good, but good men are induced by the political process to do harm. [So] discipline the writ of politics to the bare minimum.

Capitalism is the system to which people...have aspired where they have been free.

The market is not safe with politicians in any party.

Capitalism . . . creates a more effective form of democracy for enabling all the people...to decide their lives.

The essence of capitalism...is that it allows individuals to take the risks of living their lives as they see best.

The capitalist market . . . puts power—effective purchasing power—directly into the hands of the common man and woman for them to use where they wish . . . . That is why the market is more essentially democratic than government.

There are no democratic safeguards for political irresponsibility because the “other people” whose money is being spent cannot closely approve the reasons, check the calculations or trace individual losses.

Pricing is the peaceful way of resolving argument and conflict.

It was the development and refinement of the law of private property rights that explains . . . modern progress.

The evolutionary spontaneous freedom under capitalism for individuals to act without collective restraint is necessary for some to forge ahead and show the others the way . . . as the others follow, more can share in the advance.

That in practice markets are imperfect has obscured the more fundamental truth that they are the best-known way of enabling individuals to meet for mutual benefit . . . World practice and experience...show no better, less imperfect, mechanism.

In markets . . . Individuals may act with the motive of self-interest but the consequence is usually to serve the general interest because transactions will not normally be made unless they benefit both . . . parties . . . They do not profess to know the interest of others better than others do themselves. This is the profession of politicians.

Capitalism embraces the self-correcting mechanisms of open discussion in free society to identify error and open competition in free markets to apply the corrections.

As government has been inflated . . . It has undermined the instrument that could have done more for the common man.

Popular sovereignty . . . is nowhere better exerted than in the market.

The market does not require people to be good: it takes people as they are and induces them to do good by using their capabilities to provide what others want.

Wherever it is used, government is so disappointing or worse—inefficient, unaccountable and corrupt—that it is best not to use it at all except for functions where all its faults have to be tolerated to obtain the services required . . . In short, the price of government is so high that it should be avoided wherever possible.

We should ask government to do as little as possible...even where it can do good, unless there is no other way.

The state has shown itself the false god of all who have looked to it.

Capitalism . . . requires the eventual withdrawal by government from most of its accumulated activities.

The decisive difference lies in the man-made institutions . . . that decide whether the service of self also serves or harms others. That is the essential difference between political and commercial society.

The political process . . . has become the master rather than the servant of the people.

[People] misuse their uninformed uncaring vote, but they save themselves and their families by the care they exercise in the market.

The tyranny of the political process is the unnecessary subjection of the individual to the decisions of other individuals as voters . . . not because their collective judgment is better than his, or because they know more, or are more concerned with his well-being, but solely—solely—because there are more of them.

Individuals are smothered by collective decisions in the political process.

The market of capitalism treats people as individuals; the political process of socialism herds them into categories. Capitalism makes for harmony, socialism for friction.

Though Arthur Seldon is not well known to Americans, his centennial provides a good reason to consider his work. As the IEA website put it, “Seldon highlights the improvements of mankind which came about not through some central plan or social organization but through individuals recognizing an opportunity to produce goods and services which met a need expressed by the demand in the market.” In so doing, he advanced every individual’s potential, which is expanded by private property and voluntary market arrangements, but paralyzed to the extent politics hinders the freedom and cooperation they engender. As he put it:

Politics must be reduced to a necessary but specialized and minor service...The few politicians required for the few unavoidably collective functions can be hired and fired like the rest of us, and not allowed to . . . forget their place. We should regard them with skepticism, not with reverence.

[This article is adapted from Lines of Liberty, by Gary M. Galles.]