Parental Choice: A Better Way to Fulfill the Legacy of Brown v. Board of Education 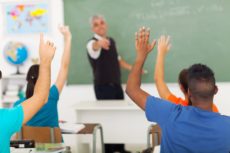 This month marks the 62nd anniversary of the landmark Supreme Court case, Oliver Brown et al. v. Board of Education of Topeka, Kansas, which struck down the notion of “separate but equal” public schooling for black students. In spite of the civil rights advances we’ve realized over the past several decades, equal educational opportunities remain out of reach for far too many American school children.

According to former US Secretary of Education Arne Duncan, in 1980 “the U.S. Department of Education opened with a mission to ensure equal educational opportunities for all students.” How? By spending more...lots more.

Back in 1980, the department spent nearly $7 billion, roughly $20 billion in current dollars, on elementary and secondary education, directing about half of that to Title I schools enrolling high proportions of low-income students. Today, that budget has more than doubled to almost $43 billion.

Surely, after all that spending students would be doing better, right?

Research does show that achievement gaps among students of different races have narrowed, but even Duncan acknowledged that “far too often I see lingering opportunity gaps, in communities isolated by race and income.”

Eric Hanushek, senior fellow at Stanford University’s Hoover Institution at and research associate at the National Bureau of Economic Research, put it more bluntly in a recent Education Next interview:

After nearly a half century of supposed progress in race relations within the United States, the modest improvements in achievement gaps since 1965 [when the Elementary and Secondary Education Act, ESEA, was enacted] can only be called a national embarrassment. Put differently, if we continue to close gaps at the same rate in the future, it will be roughly two and a half centuries before the black-white math gap closes and over one and a half centuries until the reading gap closes. If “Equality of Educational Opportunity” was expected to mobilize the resources of the nation’s schools in pursuit of racial equity, it undoubtedly failed to achieve its objective.

Of course it costs money to educate children; however, higher spending doesn’t guarantee better achievement, which is confirmed by comparing 2015 National Assessment of Educational Progress (NAEP) results to those from 2003 (the earliest year detailed state-level NAEP math and reading performance data for fourth and eighth graders are readily available for most states. Detailed twelfth grade results are not consistently available for most years.).

Conventional wisdom would suggest that only the big-spender states would be the top performers. Not so.

Next comes New Jersey, the country’s second-highest spender at more than $18,500 per student. The Garden State achieved statistically significant NAEP gains in fourth grade math and reading of 11 and 16 points, respectively—tying Iowa, which spends $10,300 per student, in math, and Georgia, which spends $9,100 per student, in reading. Yet several states posted higher NAEP gains than New Jersey in each subject, including Alabama, Arizona, Arkansas, Florida, Indiana, Mississippi, Oklahoma, and Tennessee—all the while spending about half or less per student.

None of the next four highest spenders at between $15,800 and $18,200 per student, Alaska, Connecticut, Vermont, and Wyoming, posted statistically significant NAEP gains for low-income black students.

Rounding out the top spenders is Massachusetts, $15,300 per student, which did post statistically significant gains in fourth and eighth grade math, nine and 13 points, respectively; however, low-income black students in states that spent far less did much better, including the states that outperformed New Jersey for less than $9,000 per student on average.

Achieving more with less is not an accident. Among the states with statistically significant elementary school NAEP math and/or reading achievement gains for low-income black students, more than 70 percent of them have private school parental choice programs, including tax-credit and voucher scholarship programs, as well as education savings account (ESA) programs.

Among the top five performers, low-income black fourth and eighth graders in parental choice states Arizona, Florida, Georgia, Indiana, and North Carolina—each of which spend between $7,500 and $9,500 per student—consistently performed as well or better in math and reading than their peers in the big-spender states, including Connecticut ($17,300 per student), Massachusetts, New Jersey, and New York.

These programs not only benefit scholarship students, they introduce competition for students and their associated funding, which puts powerful pressure on all schools to improve their performance.

According to the US Department of Education, students from the most disadvantaged backgrounds (referred to as socioeconomic status or SES) who had attended private school in eighth grade were more than three times as likely as their public school peers to have earned a bachelor’s degree by their mid-twenties (24 versus 7 percent) (p. 24).

Several more gold-standard studies find that students participating in private school parental choice programs have higher math and reading achievement, higher high school graduation rates, are more likely to enroll in college, and have higher college completion rates than their peers who do not have access to such programs.

Competition for students also results in improved public school performance, according to the vast majority of scientific studies (see here, here, and here, for example).

Today, more than 51 scholarship and ESA programs in 29 states (including DC) are benefiting nearly 300,000 students.