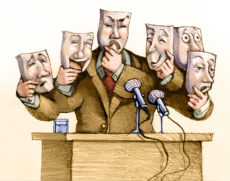 Rhetoric is often insidious, especially in political and policy-related discourse. The words a writer or speaker uses to express his ideas may easily tilt the reader or listener’s evaluation toward unwarranted acceptance or rejection. Politicians and others who make public pronouncements understand this effect, and they choose their words with an eye toward using the terms that make their arguments and proposals most persuasive.

Perhaps the most dangerous examples pertain to the ordinary, oft-used words “we,” “us,” and “our.” The danger arises because these words relate to groups of people, perhaps to groups as small as those with only two individuals, but often to groups comprising hundreds of millions of persons. Speaking in terms of collectives predisposes everyone who reads or hears the words toward the assumption that a collective is the appropriate concept for the consideration of what is right or wrong, desirable or undesirable for the government to do.

But some actions the government may take or refrain from taking relate intrinsically to individuals alone. For example, justice and injustice are attributes of actions taken by and in regard to specific individuals. F. A. Hayek long ago exploded the fallacy of “social justice”—not that his debunking of the concept has had a noticeable effect on its widespread, seemingly ineradicable use in public debates. Indeed, an entire class of incoherent anti-liberty crusaders now consists of SJWs—so-called social justice warriors.

When a politician proposes, for example, that dropping bombs on foreign groups X, Y, and Z will be a means of making “our” country great again, he uses language that sweeps under the rhetorical rug the fact that not all the individuals resident in “our” country agree either that dropping the bombs as proposed would be a moral, wise, or productive action or that even if such bombing were to prove moral, beneficial, or desirable to some residents of the country it would prove beneficial or desirable to all. Indeed, the lumping of all persons into a collective category invariably suppresses the reality of such intrinsic differences—after all, not even the most homogeneous country consists of individuals who agree about anything, much less about everything. Politicians and other special pleaders use collective terms in order to disregard or discredit those who disagree with their proposals, policies, and actions. So, when Donald Trump or Bernie Sanders claims that “our” economy would benefit by placing greater tariffs on imports, he is in effect dismissing the plain fact that consumers in general and many specific producers in particular would be harmed by such protectionism and, indeed, that the overall real income of the country—another collective concept of dubious meaning—would be reduced as a result.

When politicians or special pleaders propose that “we” should undertake A, B, or C as a government action or policy, they also mislead people by intimating that you, I, and everyone else—that is, “we”—are all engaged in undertaking these actions or adopting these policies. In truth, however, more than 99 percent of the people in the country will have no direct involvement whatsoever in these undertakings. Policy making and law enforcement are the work of an elite of people who take or directly influence government action. For all the influence you, I, and nearly all other ordinary people have on the process, we might as well be doing the rain dance or chanting mantras around a camp fire in the forest. Any one of us might turn out to benefit from what the elites do in their capacity as government functionaries or as movers and shakers, but it is much more likely that any one of us will simply be victimized by the specific government action at issue, as we are already victimized by the countless measures the government has taken to destroy our liberties, extort our income in taxes, fees, civil asset forfeitures, and other takings, and fill our lives with the fear of arbitrary government violence against inoffensive individuals and even their harmless dogs.

No amount of blather about “we,” “us,” and “our” can change the realities of government’s crushing every individual subject to its power into the Procrustean bed of its collective, one-size-fits-all standard, albeit the kingpins always seem to find a way to avoid compliance with the same dictates that supposedly apply to people in general.

Note, however, that free individuals who deal according to their own lights with others in markets have no need to consider such collectives and their desirability or lack thereof. If Walmart wishes to sell me a particular product and I wish to buy it at the price being asked, I have no need to persuade anyone else that “our” collective well-being will be enhanced by my making this transaction; nor has anyone else any need to persuade me likewise about his market transactions. By allowing each individual the scope to pursue his interests as he thinks best, there is a presumption that the aggregate well-being of everyone as a group—another problematic collective concept—will be maximized ipso facto so long as no one’s transaction impinges on the equal rights of every other transactor. The insidious collectivisms of the public “we,” “us,” and “ours” need never enter into the conversation or even into anyone’s consideration.

In sum, political discourse is infested with fallacies that spring from the careless or conniving use of collective terms, including linguistic commonplaces that in many uses do no harm at all and indeed help us to express ourselves more effectively. But politicians and special pleaders learned long ago that one of the most effective nets for entangling their victims and gaining their assent is to employ misleading language, especially the terms for collectives. Man, said Aristotle, is a political animal. A corollary of this proposition is that political man is a fallacy monger who employs language to get what he wants at other people’s expense.