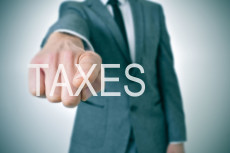 According to the Tax Foundation, “Tax Freedom Day” this year falls on April 24th—six days after 2015’s personal income tax returns were due (on the 18th if you forgot to file). April 24 marks the day on which the average American will have earned enough income to pay his or her total local, state and federal tax bill, which includes payroll taxes, sales taxes, excise taxes, property taxes, corporate income taxes and and taxes on individual incomes.

The total bill amounts to $4.9 trillion, of which $3.6 trillion goes to Uncle Sam. Since Americans now spend a bit more than $4 trillion on food, clothing and shelter every year, local, state and federal taxes represent the single largest drain on the typical family’s budget.

One interesting wrinkle here is that Pfizer just announced the cancellation of its proposed $160 billion merger with Ireland-based Allergan, owing to worries about new U.S. Treasury rules designed to prevent so-called tax inversions. Such strategies, implemented by, for example, Burger King, which moved its corporate headquarters to Canada, are aimed, rationally it should be said, at reducing a company’s total tax liabilities by relocating to a lower-tax jurisdiction.

The federal corporate income tax rate in the United States tops out at 39 percent of taxable income. It is near the top of the list (tied with France) of the highest corporate income tax rates levied by developed nations belonging to the Organization of Economic Cooperation and Development (OECD). Many localities and states also tax corporate income; corporate earnings distributed to investors as dividends are taxed again at the taxpayer’s individual income tax rate. So, too, are capital gains when ownership shares (stocks) are sold.

Eliminating such double taxation, and lowering corporate tax rates to levels more competitive with the rest of the world, would go a long way toward reducing what progressives call “unpatriotic” tax dodging far more effectively than empowering the U.S. Treasury to interfere with the free flows of capital across national borders. After all, as Judge Learned Hand once wrote, in Gregory v. Helvering 69 F.2d 809, 810 (2d Cir. 1934):

Anyone may arrange his affairs so that his taxes shall be as low as possible; he is not bound to choose that pattern which best pays the treasury. There is not even a patriotic duty to increase one’s taxes. Over and over again the Courts have said that there is nothing sinister in so arranging affairs as to keep taxes as low as possible. Everyone does it, rich and poor alike and all do right, for nobody owes any public duty to pay more than the law demands.

Indeed, because only people pay taxes, a principled case can be made for reducing the U.S. corporate income tax rate to zero.