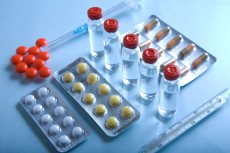 Donald Trump does not want Chinese goods or Mexican workers to come into America. However, there appears to be one set of items he wants to cross our border, according to his Healthcare Plan to Make America Great Again:

Remove barriers to entry into free markets for drug providers that offer safe, reliable and cheaper products. Congress will need the courage to step away from the special interests and do what is right for America. Though the pharmaceutical industry is in the private sector, drug companies provide a public service. Allowing consumers access to imported, safe and dependable drugs from overseas will bring more options to consumers.

A more wrong-headed notion of free trade would be hard to imagine. One thing he is right about is that the pharmaceutical industry comprises a “special interest.” And it is a “special interest” of which politicians like Hillary Clinton feed quite well.

The Donald is above all that – self-funding his political career, in case you had not heard. He may not be as interested in shaking down the pharmaceutical industry as Hillary Clinton is, but his prescription drug proposal is just as bad as hers.

First, free trade requires willing buyers and sellers. Brand-name pharmaceutical companies are not willing to sell their products in the United States at the same prices they sell in foreign countries. Those prices are too low to sustain their business models. Foreign drug companies, like GlaxoSmithKline or AstraZeneca, are free to sell their medicines in the U.S. And they do so at higher prices than in their home countries.

Many people blame foreign governments’ price controls for artificially low prices. However, there is also market segmentation: Other countries have lower incomes than the U.S. does, so manufacturers charge lower prices.

This happens even in unregulated retail markets. I just checked the price of filing my U.S. tax return via TurboTax. The most popular version costs $34.99 for the federal return only. TurboTax Canada charges C$19.99, about $14.99, or less than half the price of the U.S. version.

Whether the reason for lower drug prices in other countries is government price controls or manufacturers’ pricing strategy, the policy endorsed by Mr. Trump is certainly not about “free markets.”

The best way to lower prescription drugs prices is not to fight against the companies that research, develop, and manufacture them. It is to reduce the regulatory burden of the Food and Drug Administration so new medicines are launched faster at lower cost. Mr. Trump’s “healthcare plan to make America great again” does not mention the FDA even in passing.