Fear and Trembling in Phoenix: A Common Core Cautionary Tale, Part I 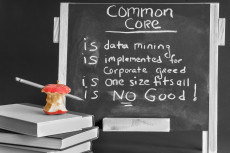 Arizona is widely hailed as the national leader in school choice. It is also one of a growing number of states turning against Common Core. But you wouldn’t know it from what’s going on inside the Capitol these days.

Proposed legislation affirming parents’ basic rights over their children’s education is being held or amended within an inch of its life in the House and Senate Education Committees—all in spite of an existing explicit statutory Parents’ Bill of Rights affirming their inalienable liberty over their children’s education and upbringing (see here and here).

As more states fight back against federal contamination of classrooms, Arizona offers an important lesson about extinguishing Common Core for good—so it doesn’t keep rising from the dead in one infectious form or another.

About a year ago Arizona Governor Doug Ducey urged a “review and revise” placebo instead of a “repeal and replace” antidote for Common Core. Last fall at the urging of the state’s elected pro-parental choice/anti-Common Core Superintendent of Public Instruction Diane Douglas, a majority of the State Board of Education voted to sever ties with it—but the board left the Common Core-influenced standards and the reviled AzMERIT state assessment in place.

This course of action hasn’t cured a thing, but it is exposing how some lawmakers are willing to protect parents’ inalienable rights only up to a point. In other words, parental choice ends once they’ve exercised school choice.

Once inside, students are creatures of the state. They can be given the Common Core-influenced statewide assessment, have their personal information collected via that assessment, and have their personal information shared with state and federal government entities as well as third-parties. All this without prior notice, review, or informed written consent from their parents.

Consider just some of the examples of the pernicious, lingering effects Common Core can have—because if they can happen in the school-choice leader state, they can happen just about anywhere.

Proposed opt-out legislation that would have allowed parents to exempt their children from the Common Core-influenced state assessment was inexplicably held by House Education Committee Chairman Rep. Paul Boyer—even though he originally co-sponsored it.

That is, until they learned she subsequently amended away parents’ right to opt out their children from the state assessment, and replaced it with a compromise to let parents “opt in” to another statewide test. Viola! Choice—but not over what matters most to parents.

There is legitimate and growing concern that statewide assessments—pick whichever one you like—are now (or are on their way to becoming) more about data mining, not measuring academic performance.

As of this writing, parents are still hopeful that Sen. Allen will restore the opt-out provision. But any lawmaker who supports parents will likely take a lot of heat from the Common Core establishment—including affiliates of the U.S. Chamber of Commerce, which vowed last year to apply “political pressure around the clock,” according to Breitbart News.

Other proposed legislation would have required prior written notice from schools and parents’ informed consent before their children were assessed to protect students’ privacy. That requirement was recently gutted by an amendment from the House Education Committee Vice Chairman, Rep. Jay Lawrence.

Thankfully, legislation sponsored by Sen. Judy Burges and other lawmakers, including Sen. Allen and Rep. Lawrence, requiring prior notice, parental informed consent, and stiff penalties for collecting and sharing students’ personally identifiable information hasn’t been amended to death. But stayed tuned: it expressly prohibits the adoption or administration of any state or national test that collects non-academic personal information, so it will likely become a target.

So Common Core can’t in any meaningful sense be “contained,” and it’s already infecting far too many lawmakers. After all, if they are willing to compromise on parents’ rights, what won’t they compromise on later on?

To truly kill Common Core and protect parents’ rights, states have to cut the pathogen’s pathway between them and its source.

In fact, Arizona used to do this to stay infection-free and protect inalienable rights.

Nearly 60 years ago Arizona was the only state (p. III-4) that didn’t accept federal K-12 funds through the National Defense Education Act because it had twelve mandates—a regulatory pittance by twenty-first-century standards.

Back then Arizonans refused to be bribed with their own money because, as U.S. Senator Barry Goldwater predicted, “federal aid to education invariably means federal control of education” (p. 76, emphasis original).

We all would be better off today had we heeded Goldwater’s warning, but it’s not too late if we follow the Constitution, not Common Core.

Vicki E. Alger is a Research Fellow at the Independent Institute and Senior Fellow and Director of the Women for School Choice Project at the Independent Women’s Forum. She is the author of the Independent book, Failure: The Federal Misedukation of America’s Children.
Posts by Vicki E. Alger | Full Biography and Publications
Civil Liberties Civil Society Common Core Constitution Education Personal Liberty Politics Power The State
Comments
Before posting, please read our Comment Policy.