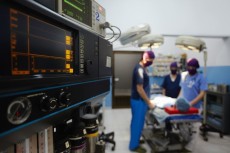 Robert Lazsewski is a leading health insurance expert whom I often cite (see, for example, here and here). Unfortunately, in a recent article praising Ohio governor John Kasich he has made a serious error. Gov. Kasich is one of only three Republican governors who took federal Obamacare money to expand Medicaid dependency. According to Mr. Laszewski:

On Medicaid, the Kasich administration helped 650,000 people whose uncovered health-care costs were being shifted onto and burdening employers and individuals struggling to pay their already-high health insurance costs. The administration enrolled them into a new Ohio Medicaid system that made 38 different reforms over five years. In 2015 alone, it saved Ohio taxpayers $1.9 billion compared with the original state-budget target. It held the program’s per capita cost growth below 3 percent while cutting the state’s uninsured rate in half.

The idea that people who cannot pay their hospitals bills are the major problem in driving American health costs is evidence-free. According to a September 2014 report promoting Obamacare’s benefits, the Affordable Care Act would reduce so-called “uncompensated care” by $5.7 billion in 2014. Health spending in 2014 was $3 trillion, so $5.7 billion is less than one-fifth of one percent of national health spending!

The only parties helped are hospitals. For them, charity care gets paid by federal taxpayers instead of being written off as a loss. At best, there is zero social benefit to that transfer. It is still charity care, just paid by a different party.

This is surely a far different method of financing local non-profit hospitals than the city fathers and religious orders which founded them had in mind.