Milton Friedman’s Solution for Social Security Would Work for Government Pensions, Too 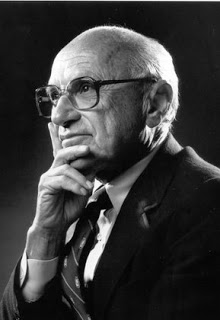 Milton Friedman, the 1976 Nobel Laureate in economics, was interviewed on the television program Uncommon Knowledge in 1999, and he offered a solution to Social Security’s financial problems: shut it down.

But Friedman didn’t advocate that the federal government walk away from its promises.

Issue the bonds; then shut down Social Security.

This approach ensures that everyone gets what he or she has been promised. It brings the true cost of the unfunded liability above board. It funds the unfunded liability and requires the federal government to establish a specific financing plan to pay off the bonded debt. And it closes Social Security, a program whose tax and benefit design is morally indefensible.

Here’s what Milton Friedman said in 1999:

Applying Friedman’s solution, state and local governments across the country would close their defined-benefit pension plans and issue bonds to beneficiaries equal to the current expected value of the stream of benefits owed. The bonds would be due today or at retirement depending on the beneficiary’s stage of life.

As with Social Security, this approach would ensure that people receive what they have been promised. It would force governments to acknowledge the true extent of the unfunded pension liabilities and establish a specific financing plan (something they refuse to do today). And it would permanently close these politically mismanaged defined-benefit plans.

Going forward, government employees would be offered 401(k)-style pensions, just like the plans offered to most private sector workers with employment based retirement plans.

Once again, Milton Friedman had the answer.