Yesterday marked the 214th anniversary of Frédéric Bastiat’s birthday on June 30, 1801, in Bayonne, France. One of the seminal thinkers of the classical liberal tradition, Bastiat made great contributions to the field of political economy, laying many of the foundations for the later school of Austrian economics. Both a politician and a writer, Bastiat penned numerous books and essays on political economy and how its principles could be applied to mid-19th century France, writing with his razor-sharp wit and renowned rhetorical flair. While his works pertain to post-Napoleonic France, they carry important lessons for our nation’s leaders, politicians, and economists.

One of Bastiat’s most important lessons appears in That Which is Seen, and That Which is Not Seen, where Bastiat applied his careful method of logical procession to economic questions. In this work, he examines the same topics that are commonly misunderstood by contemporary politicians: military spending, taxes, the economic benefits of saving, and mechanization, among others. In each examination, he demonstrates that the economist or policy maker must look beyond the apparent to understand the true effects of a policy, showing in every case that the arguments for government intervention are inherently flawed. If one were to apply this method to the argument for raising the minimum wage to $15, for example, one would see that the unseen effects, the firing of low-skill workers and increased prices, are damaging. It is this logical method that informed many in the Austrian school of thought and formed the foundation of Henry Hazlitt’s seminal Economics in One Lesson, which is a more thorough investigation of Bastiat’s principle. 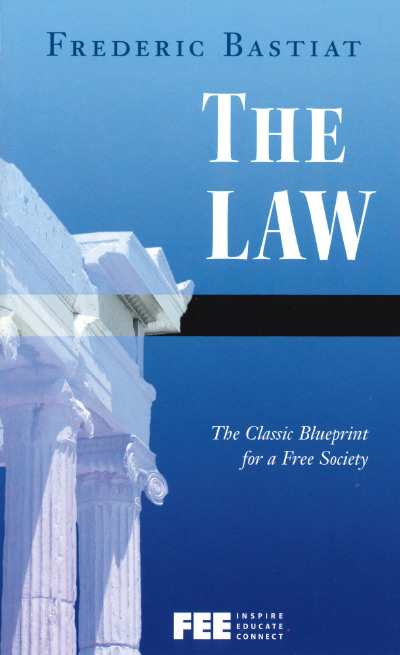 Bastiat’s relevance to modern policy is not only for his influential method of economic thinking. In The Law, perhaps his best known work, Bastiat puts forth several political theories that have relevance to democratic republics of any era. The central idea behind the work is an application of Bastiat’s fundamental theory of law: “Law is common force organized to prevent injustice; in short, Law is Justice.” With this conception of ideal law as justice, Bastiat explores how different government policies frequently subvert the rule of law. For example, one of Bastiat’s most forceful assertions is that using taxes to redistribute wealth or goods is legalized plunder, as it treats some individuals different from others under the law, which is unjust. This is particularly relevant in today’s political climate, when many are clamoring for an increase in publicly provided goods and decrying income inequality.

The remainder of The Law deals with the idea commonly held by the French elites at the time, that man lacks “impulse” and must be spurred to action by a legislator or ruler. This idea sharply resonates in modern times, when large portions of academia believe that government intervention is the solution to any problem plaguing our nation, whether political, economic, or even societal. At its core, this idea that the people derive their impulse for action only from the government is antithetical to the ideas of democracy, republicanism, and liberty.

Frédéric Bastiat’s work stands as one of the greatest contributions to political economy ever written. He articulates fundamental principles of liberty and justice, explaining why they must be in harmony, and demonstrates how the liberty of the people and the rule of a just law will contribute to the prosperity of a nation. These ideas are certainly acknowledged today, but Bastiat’s explanations are timeless and persuasive, and any serious student of government or economics today ought to immerse themselves in his writings.