How Big Is Government in the United States? 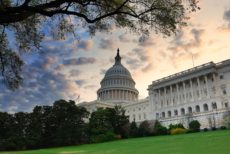 How big is government in the United States? The answer depends on the concept used to define its size. Although many such concepts are available, and several are used from time to time, by far the most common measure, especially in studies by economists, is total government spending (G) as a percentage of the gross domestic product (GDP).

Using official data available at the online repository maintained by the Federal Reserve Bank of St. Louis and data available online for the Bureau of Economic Analysis’s National Income and Product Accounts, I have calculated that for the five-year period 2010-14, this measure of the size of government—including all levels of government, not simply the federal government, and all types of spending, not simply purchases of currently produced goods and services—was 35.8 percent.

On reflection, however, one might well wonder why G has been “normalized” so often by measuring it relative to GDP. One reason this practice is questionable is that GDP includes a large part—equal in recent years to about 10 percent of the total—known as the capital consumption allowance. This is an estimate of the amount of spending that was required simply to maintain the value of the nation’s capital stock as it depreciated because of wear and tear and obsolescence. Given that GDP is defined to include only “final” goods and services, it is questionable that expenditures made solely to maintain the capital stock should be included at all, rather than excluded as “intermediate goods,” as a large volume of the economy’s total output is already excluded (e.g., steel sold the manufacturers of machinery, wheat sold to flour mills).

One way around this difficulty is to measure G not relative to GDP, but relative to net national product, which, except for a statistical discrepancy, is the same as the accounting concept known as national income (NI). Using NI as the denominator, for the same period 2010-14, we find that size of government in the United States was 41.4 percent. This figure, however, may still give a misleading impression of the relative size of government because NI includes elements that are more or less remote from the economic affairs of individual households.

After some adjustments to NI, including several deductions (e.g., for contributions to government social insurance) and several additions (e.g., for personal income receipts on assets), we arrive at the accounting concept designated personal income (PI), which, because the foregoing deductions and additions have been almost offsetting, has been approximately the same as NI in recent years. From the total PI, individuals pay taxes, spend a portion (designated personal consumption, C), and save the rest. PI is the income concept that accords most closely with ordinary people’s notion of their income.

Personal consumption outlays, which currently amount to about 95 percent of disposable (that is, after-tax) personal income, are an arguably superior denominator for the measurement of the relative size of government. If we use it as such, we find, for the same period 2010-14, a figure of 52.2 percent. Thus, by a more meaningful measure, total government spending is equivalent not to a little more than a third of the economy (G/GDP) nor to a little more than four-tenths of it (G/NI), but rather to a little more than half of the part of the economy that affords immediate satisfaction to consumers (C/PI).

Even this measure fails to indicate how great the government’s presence in our lives really is, however, because governments at every level impose a vast number of legal and regulatory requirements that must be met out of the people’s own resources. Such outlays are not included in any government’s budget even though they are made only because governments require that private parties make them. Where private businesses meet the costs of compliance with such government requirements, the effect is to increase the businesses’ operating costs and hence to cause the prices of their products to be greater than they otherwise would be. The resulting diminution of consumers’ purchasing power constitutes a hidden tax, and there is good reason to suppose that the amount of this tax—whose complications preclude precise estimation—is tremendous.

According to Wayne Crews, who makes an annual estimate of the cost of compliance with federal regulations alone, “Costs for Americans to comply with federal regulations reached $1.863 trillion in 2013”—which is equivalent to more than 13 percent of national income. Compliance with state and local government regulations surely adds a large amount to Crews’s estimate for federal compliance alone. No one needs to tell Americans, however, how onerous and exasperating the entire mass of government regulations and related red tape has become. Virtually every part of economic and social life now bears these heavy burdens, and any truly meaningful appraisal of the size of government today must take them into consideration along with the amounts the various governments are spending.

Of course, the root problem here is that government spending is defined as a component of GDP in the first place. It never should have been included—and it might never have been included had the government not established a command economy during World War II. Government spending either is completely wasteful, merely transfers income, purchases an intermediate rather than a final good, or purchases valuable final services whose value cannot be ascertained because the transaction is not made by private parties exchanging their own resources in a market setting.