Joseph Stiglitz: The Price of Inequality 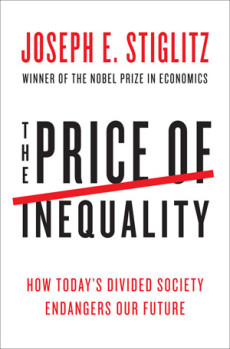 Although Joseph Stiglitz has a reputation as one of the most prominent defenders of big government, I found much to agree with in his book, The Price of Inequality. It does appear to me that throughout the political spectrum, from left to right, there is a substantial consensus that government is the cause of many of the problems people perceive. The disagreement is over how to solve those problems.

Stiglitz sees many negative consequences from income and wealth inequality, and while I would question whether these negative consequences are as substantial as Stiglitz says, we both agree on the negative impact that government policy has in our society. Stiglitz, a critic on the political left, is in surprising agreement with David Stockman, a critic on the political right, that many of today’s economic and political problems are caused by government.

Both Stiglitz and Stockman argue that cronyism is damaging both our economic system and our democratic political system.

In Chapter 1 Stiglitz outlines the problems he sees, and in Chapter 2, titled “Rent Seeking and the Making of an Unequal Society,” he explains why government polices are a major factor creating those problems.

Stiglitz (pp. 39-40) says, “we have a political system that gives inordinate power to those at the top, and they have used that power not only to limit the extent of redistribution but also to shape the rules of the game in their favor.... Economists have a name for these activities; they call them rent seeking, getting income not as a reward to creating wealth but by grabbing a larger share of the wealth that would have otherwise been produced without their effort.”

Talking about the lawyers and accountants who work for rent seekers, Stiglitz (p. 53) says, “They help write the complex tax laws in which loopholes are put, so their clients can avoid taxes, and they then design the complex deals to take advantage of those loopholes.”

Stiglitz (p. 54) says, “The simplest way to a sustainable monopoly is getting the government to give you one.”

Criticizing the cronyism between business and government, Stiglitz (p. 59) says, “It’s one thing to win a ‘fair’ game. It’s quite another to be able to write the rules of the game–and to write them in ways that enhance one’s prospects of winning. And it’s even worse if you can choose your own referees.”

Stiglitz (p. 62) says, “It doesn’t have to be this way, but powerful interests ensure that it is.”

In a chapter titled “Why It Matters,” Stiglitz (pp. 104-105) says, “When one interest group holds too much power, it succeeds in getting policies that benefit itself, rather than policies that would benefit society as a whole. When the wealthiest use their political power to benefit excessively the corporations they control, much-needed revenues are diverted into the pockets of a few instead of benefiting society at large.”

In another chapter titled “Democracy in Peril,” Stiglitz (p. 167) says, “In this chapter we have described the construction of a political system that, though nominally based on the principle of one person one vote, has turned out to serve the interests of those at the top.” Why can’t we reform the system? Stiglitz (p. 170) says “moneyed interests have the incentives and resources to ensure that the system continues to serve their interests.”

Stiglitz (p. 202) says, “One of the most effective ways of influencing public opinion is to capture politicians. ... Politicians have an incentive to espouse ideas that serve the moneyed interests.”

I read Stiglitz to be saying that big government and the cronyism that comes with it is the cause of most of the problems he cites. Stiglitz explains why it is that the 1% are able to control the political process to favor themselves over the 99%. So, I would think the solution would be smaller government, so the 1% have less they can control. A government that taxes less, spends less, and regulates less, offers fewer oppotunities for cronyism. Alas, Stiglitz sees the solution as more government: higher taxes, more effective redistribution programs, and more effective regulation.

Stiglitz has explained how the rich gain control of the political process and use it for their benefit, so the idea that more government can solve these problems that are created by government in the first place seems to be nothing more than wishful thinking. Stiglitz’s insights on the way that the 1% controls the political process should lead him to the conclusion that less government means less control by the economic and political elite.

I am encouraged to see that people throughout the political spectrum, from Stiglitz to Stockman to Schweizer, recognize government power as the source of many of our contemporary problems. They don’t agree on the solutions. Those on the left see more government, and better government, as the remedy to poor government policies, which seems counter-intuitive. Why would we think a bigger government would work better than the government mess we already have? Stiglitz has already explained how all the incentives lean toward making government more responsive to the elite, at the expense of the masses.

But if we agree that government has caused many of the problems we all see–all of us from the political left to right–then we are part-way toward finding a solution that we all agree would fix those problems. My thought is: eliminate what we all agree is the cause.