Bono: “Capitalism takes more people out of poverty than aid” 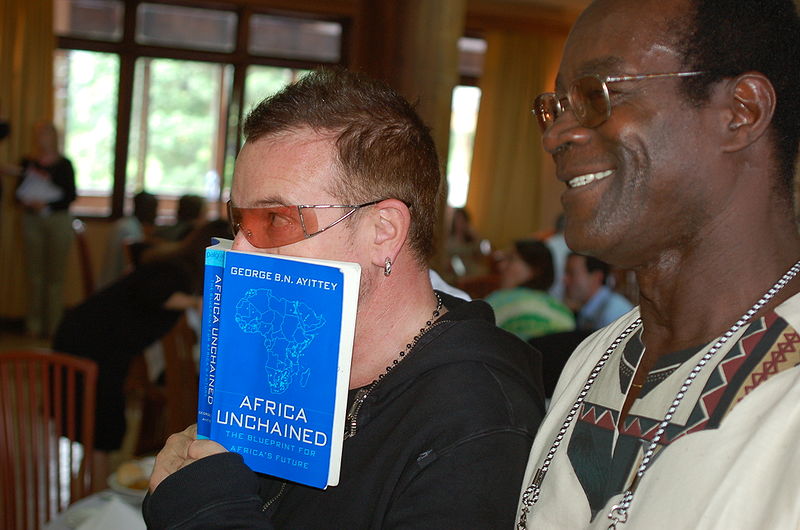 Our Senior Fellow George Ayittey met the Irish rock star Bono in July 2007 during a TED conference. Professor Ayittey was speaking and in knowing that Bono would be in the audience, he explains that “I made a special effort to rip into the foreign aid establishment.... Later, Bono said he liked my speech but did not agree with me that foreign aid is not effective in ending poverty. So I gave him a copy of my book, Africa Unchained: The Blueprint for Development.”

Bono (nee Paul David Hewson) is the lead singer in the rock group U2, one of the most successful rock groups in history. Bono also became a major proponent of greatly expanded U.S. foreign aid and other government programs (including debt cancellation) to alleviate the dire plight in the world of HIV/AIDS, malaria, abject poverty, and other issues.

Bono has further been Co-Founder and Managing Director with the venture capital firm, Elevation Partners, and he may well be the world’s wealthiest musician after his investment in the Facebook IPO, which made over $1.5 billion for the firm.

Bono is also a Christian (see here, here, and here). He is an admirer of the work of C.S. Lewis and used Lewis’s book The Screwtape Letters in a music video for the song “Hold Me, Thrill Me, Kiss Me, Kill Me,” the theme song for the film, Batman Forever. More recently, he has indicated in an interview with Jim Daly at Focus on the Family that Lewis might inspire the next U2 album:

Bono: It’s very annoying following this Person of Christ around [chuckling], because He’s very demanding of your life.

Bono: And it’s hopeless ... trying to keep up with it.

Bono: Yeah, it might ... that could turn up on the next U2 album, but I won’t give him or you any credit.

Just recently drawing upon his Christian faith (and possibly the economics influence of Professor Ayittey?), in a speech at Georgetown University, Bono altered his economic and political views and declared that only capitalism can end poverty.

“Aid is just a stopgap,” he said. “Commerce [and] entrepreneurial capitalism take more people out of poverty than aid. We need Africa to become an economic powerhouse.” 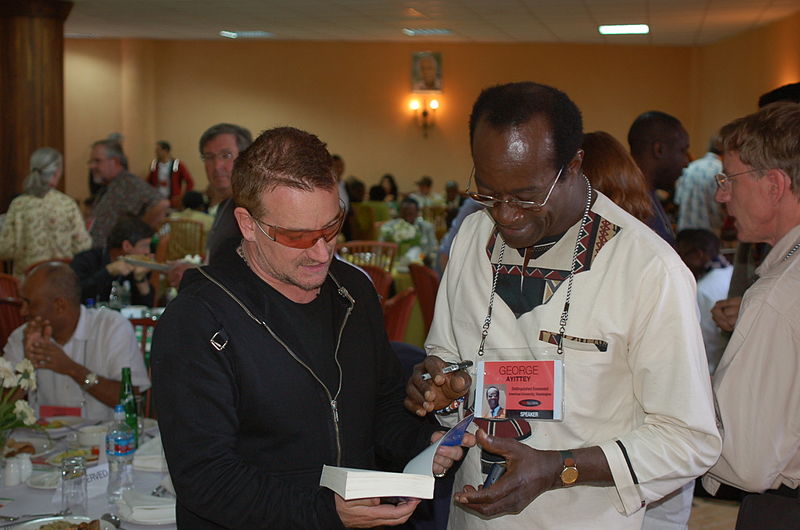 Bono encouraged students to think of what they can do to support those in Africa and other developing nations that are in need of justice and comfort.

He compared the effort to how St. Ignatius of Loyola, the founder of the Society of Jesus, made his commitment to serve others.

“That’s what I’m hoping happens here at Georgetown with you,” he said. “Because when you truly accept that those children in some far off place in the global village have the same value as you in God’s eyes or even in just your eyes, then your life is forever changed, you see something that you can’t un-see.”

C.S. Lewis well understood the fallacy and indeed evil of statism in addressing the pains and suffering of our world, and we welcome Bono’s new insights into the matter. And Professor Ayittey’s incisive work can also be found in the Independent Institute book, Making Poor Nations Rich: Entrepreneurship and the Process of Economic Development, edited by Benjamin Powell.