How Many Warnings Do We Need? 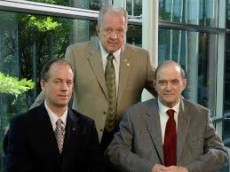 One would be hard pressed to look at these faces and think “Ooo, dangerous subversives,” yet that is precisely the picture President Obama would like to paint of these men and those like them who are trying desperately to call Americans’ attention to the very real fact that, as Thomas Drake, NSA contractor for 12 years, and NSA employee for 7 years, warns:

The government unchained itself from the Constitution as a result of 9/11. And in the absolute darkest of secrecy, at the highest levels of the government, approved by the White House, NSA became the executive agent for a surveillance program that turned the United States of America effectively into the equivalent of a foreign nation for dragnet electronic surveillance....

And we are seeing the initial outlines and contours of a very systemic, very broad, a Leviathan surveillance state and much of it is in violation of the fundamental basis for our own country—in fact, the very reason we even had our own American Revolution. And the Fourth Amendment for all intents and purposes was revoked after 9/11.

Please watch the following, and read the full account, here.

If this isn’t cause enough to revoke the PATRIOT Act, NDAA, Bush and Obama’s executive orders, and every and all activities and agencies they authorize, what would be?