Ticking Down to a National Debt Crisis

If you search the internet for “U.S. national debt,” one site you’re sure to find is the U.S. Debt Clock. If you want to get a sense of how fast the U.S. national debt is changing, it does its job, I suppose. But it’s a mistake to call it a clock.

It is really a dashboard, and a convoluted one at that. It presents about a hundred points of data. Some are directly related to the U.S. national debt, but more than half are not. From a user perspective, it’s on the level of a video gaming machine in a Las Vegas casino. It features lots of motion, but like trying to win money by playing video slots, it takes a lot of time to extract information from it.

By contrast, the Bulletin of Atomic Scientists’ Doomsday Clock gets the idea of a clock right. It’s a countdown clock that distills lots of geopolitical information into a single number: the number of figurative seconds until midnight. The fewer seconds remaining, the closer you are to an event where nuclear weapons are used in war.

After looking at both these clocks, I wondered if anybody had done anything like the Doomsday Clock for the U.S. national debt. They haven’t, but I did find some analysis that comes close.

A Doomsday Clock for the U.S. National Debt?

SchiffGold is an online seller of precious metals. Their analysts have been following how rising interest rates will affect the fiscal situation of the U.S. government. That’s probably because they believe it helps boost sales, but how they go about it makes sense. More to the point, their analysis could also work as a countdown clock to a potential debt crisis.

Here’s how they describe what they do for their analysis:

I started with data published by the Treasury that shows their entire debt schedule each month down to the Cusip level. It shows the maturity dates and the interest rates. First, I ran a mini-Monte-Carlo using different fixed rates to see the general impact. Next, I combined the Treasury data with the Fed’s own forecast. As debt rolls over, I replaced maturing debt with new debt at the Fed’s forecasted rate.

I made a few assumptions for simplicity:

Most of those assumptions are reasonable. Adding $100 billion per month, for example, would lead to an annual national debt increase of $1.2 trillion. That’s a reasonable estimate given President Biden’s proposed spending plans. Having the same yield curve for all debt is a shakier assumption, but let’s go with it for now. What will their analysis tell us?

Ticking Down to a Crisis

I’m skipping over their Monte Carlo analysis to focus on their results based on the Federal Reserve’s forecast of how it will set interest rates.

By the end of the year, they now anticipate rates at 4.4% rising to possibly 5% next year. 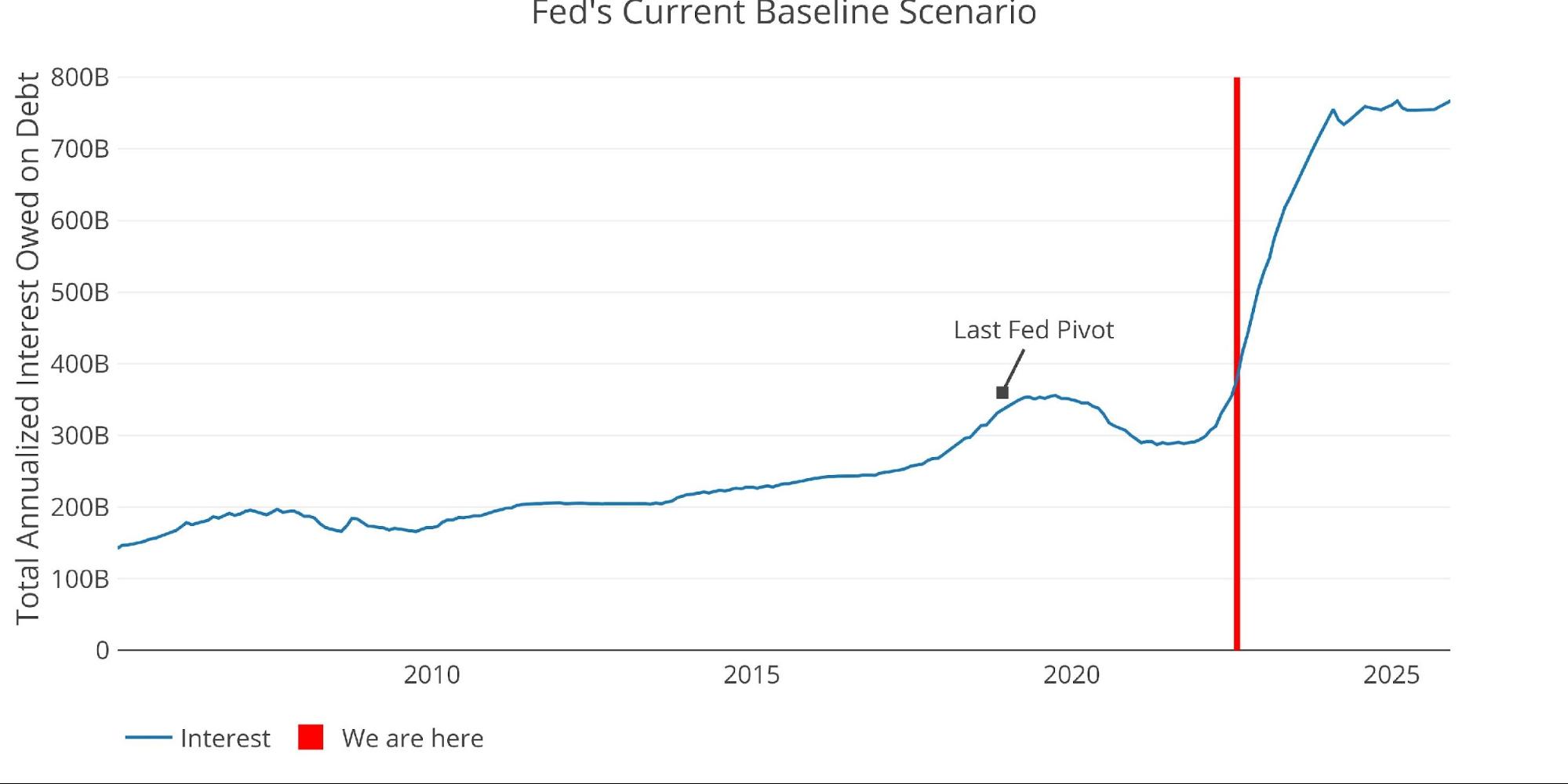 Take a minute to digest the chart above. Note how the next few months look relative to the last 20 years. This is not just a little extra strain on the economy. By Jan 2024 the Treasury will be hemorrhaging $740B in interest! That is almost $500B more than the Treasury was paying in 2021. Half a trillion dollars a year more in interest... in 15 months!! Remember when people freaked out about sending Ukraine $40B? This is 12x higher!

Having to roll over so much short-term debt in a rising rate environment can create a U.S. national debt crisis. But it won’t wait until January 2024 to arrive. It will arrive much sooner as the rate at which Uncle Sam’s interest payments to creditors surges and crowds out planned government spending.

At what point will having to pay higher interest rates force the government to limit its other spending?

That’s the trillion-dollar question. With the Federal Reserve changing its plans every few weeks, it would be nice if the U.S. Treasury Department would provide this kind of analysis to the public whenever the Fed updates its interest rate forecast. But they’re not.

This is also why setting all rates on government-issued debt to the same level, no matter what their maturities are, is shaky. Since so much of that debt is short-term, rolling over that portion of the national debt at higher interest rates will play a substantial role in any debt crisis that might develop. The extent to which those rates differ from an average rate for all maturities may become very significant.

It doesn’t have to be the Treasury Department that provides this more detailed analysis. It could be produced by any major U.S. bank or financial firm with access to the data and the forecast.

They have to know it’s a growing concern, especially because the national debt has grown so large. The current rising interest rate environment demands it.